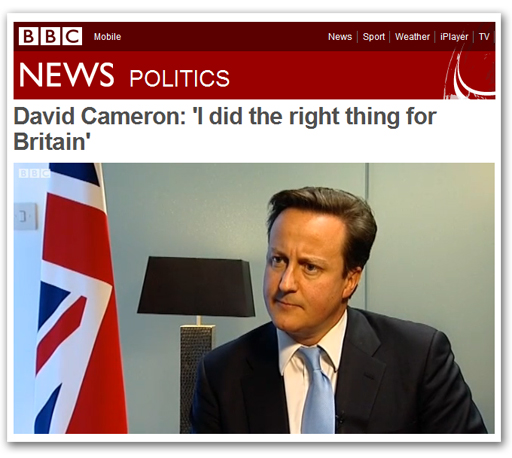 This is Cameron, according to the Failygraph: "You've never seen Britain say 'no' to a European treaty before. There was a treaty on the table, it didn't adequately protect Britain's interests. Instead of going along with it, I said no to it. I thought that's my job".

There wasn't a treaty on the table. It is inconceivable that there could have been a treaty. In fact, the colleagues have not even begun the process of drafting it – there was nothing there to sign. This is Walter Mitty territory. The man is inhabiting a fantasy world, one that does not exist.

Strangely though, no one in the media – all those thousands of clever people – has thought to ask for a copy of this treaty. After all, if there was a treaty on the table, then we ought to be able to see it, to see what The Boy has so bravely saved us from.

This is even percolating the Spectator collective. "What, precisely, has the Prime Minister vetoed?" asks Alex Massie. Good point ... so where is this fabulous treaty? 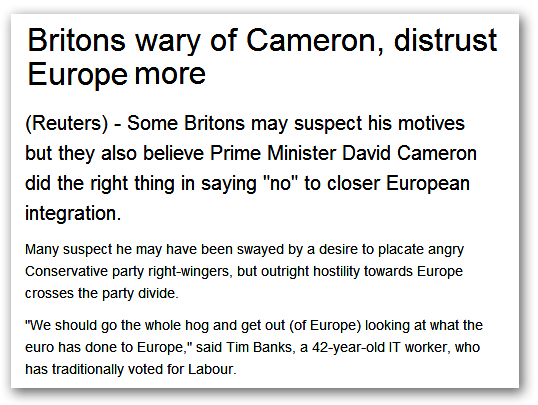 What is beginning to emerge, though, not least this Reuters report, is a picture of a Cameron so desperate to placate his "eurosceptic right" that he is now inventing his own scenarios to fit their expectations. Needing to deliver something to placate his monsters, The Boy has to resort to a fairy tale, having nothing else to offer.

For The Boy actually to have vetoed a treaty, he would of course have needed two things - an actual treaty and the framework of an Inter-governmental Conference (IGC) within which to exercise it. One wonders, therefore, why he did not insist on an IGC being convened, an issue that the "colleagues" could hardly have sidestepped, as theirs was the professed desire to have one. 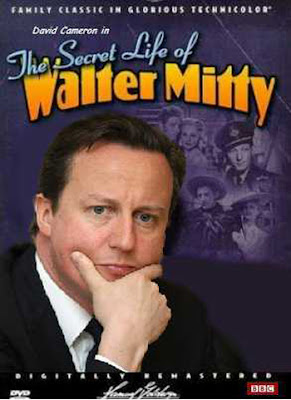 Turning this round, if the majority of members had demanded an IGC, Cameron could not have blocked one. This is decided by majority vote, with no veto, as Thatcher found to her cost. The fact that one has not been called - with the content of a treaty held in abeyance until the first meeting - rather suggests that the "colleagues" did not want one.

This may not be irrational. The formal EU treaty process is tortuous, uncertain and lengthy, and would almost certainly trigger referendums in a number of countries, such as Denmark and Ireland. By kicking the idea of an EU treaty into touch - which is the only thing Cameron has achieved - he may have done the "colleagues" a favour. That may indeed have been what they were angling for, the opposition of the UK being the one thing certain to unite otherwise diffident member states.

In a world where nothing is what it seems, Cameron may have walked into a trap, eyes wide shut. But then, he's got what he wanted - the adulation of the Tory europlastics, who are foolish enough to believe that he has achieved anything of substance, while the "colleagues" can get on with writing their treaty, without being hectored by The Boy. And without the formal declaration of a 27-nation IGC, the process is actually immune from a veto, as Cameron has already shot his bolt.

When you think about it, what's there not to like?