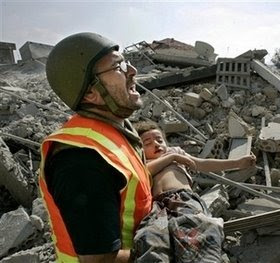 The Daily Telegraph would have had me spluttering in my cornflakes this morning, if I actually had breakfast ... or the luxury of a newspaper delivered in time to read it over breakfast.

First, we have Charles Moore in the op-ed under the heading: "Why has Israel disarmed itself in the battle for world opinion?" with the strap line: "Islamist fanatics were allowed to use the 'humanitarian' flotilla as a weapon, says Charles Moore."

And so the great Moore thus opines that, "One would be perfectly justified in writing an entire column attacking the way Israel has been misrepresented over its fatal raid on the flotilla bound for Gaza on Monday."

Then we have the lead editorial which actually has the bare-face cheek to state: "Israelis must escalate the propaganda war." This is the newspaper which is quite happily repeating the jihadist propaganda lines that the IDF mounted an "attack" on these poor little innocent "aid" workers.

But, of course, the paper is right. Israel needs to up its game and my erstwhile co-editor, with more patience than I, makes that point on her blog. But that was the point which I was making again and again in August 2006 when, as I recall, one of the high-profile cheerleaders for the Hezbollah "victims" was the gobshite Daily Telegraph, printing the propaganda photographs on its front page.

There should be much joy in heaven when a sinner repenteth, but there is also much sourness back on earth when a slimy Johnny-come-lately jumps on a bandwagon.

And as for us ... we did say it in 2006, and went on saying it behind the scenes, to anyone who would listen. But they didn't listen – they never effing do ... too much up their own arses, too full of their own importance, too clever by half.

And so, we are back again where we started. We write another blog post, pointing out the obvious, and another and another, ad infinitum. Does anyone wonder why we have a certain understanding of what drove Derrick Bird?

PROVOCATION THREAD
Posted by Richard at 12:01