Stuffed by the eurozone 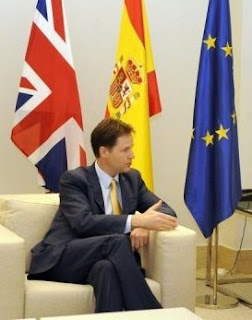 Euroslime Nicky Clegg has been telling the euros that economic sluggishness and instability in the eurozone is the "greatest threat" to Britain's own economic recovery.

The deputy Cleggeron leader was on a jolly to Spain – no doubt so his wife can pick up her Green Shield stamps – and took the time out to tell a conference in Madrid that: "Our economies are intertwined. Other EU countries are the UK's biggest trading partners by some distance - around half of all our exports go to the EU and over half our inward investment comes from there."

"That means," he said, "that economic and financial difficulties in the eurozone directly affect Britain. Indeed continuing instability and a lack of growth on our doorstep is the greatest threat to our own economic recovery ... Quite simply slow growth in the eurozone means fewer British exports, slower British growth, fewer British jobs."

Of course, there is a simple answer to that – diversify our economy, building trading relationships outside the sclerotic eurozone. Leaving the EU would also be a very good idea. But little Nicky would never agree to that ... not while he and his missus are so firmly embedded on the gravy train.

Meanwhile, Spain's economy ministry has declared that it has not made a request for economic aid from the EU, after the FT Deutschland said that Spain might need the aid if the problems at the Spanish banking sector get worse, and that the EU was preparing to activate a package in case Madrid asked for it.

On the other hand, Bloomberg is saying that European banking shares indicate a Greek debt default may be just a matter of time while Reuters claims that the ECB is continuing with its programme of buying up eurozone debt and has so far bought €40.5 billion-worth.

Yet Clegg thinks this calls for "fully" implementing existing single market legislation and extending the single market to new areas such as the digital economy. They don't call 'em Lib-Dims for nothing.