The politics of delusion 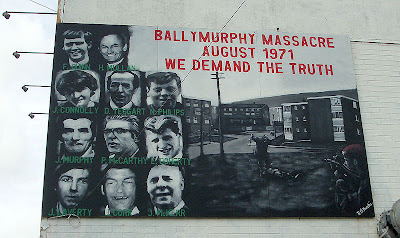 How much traction this is going to get is difficult to judge. So far, only the BBC seems to have covered it – the so-called Ballymurphy Massacre in August 1971, just short of six months before Bloody Sunday. Then, 11 people - ten men, including a local priest, Father Hugh Mullan, who was shot while giving the last rites to a dying man, and a mother of eight children - were killed, again by soldiers from 1 Para.

Now, on the back of the Saville Report, the relatives are demanding their own inquiry into what they claim is the brutality of the Paras, remarking on the similarities with Bloody Sunday where the British system also "connived in a cover-up."

The events followed the introduction of internment on 9 August 1971, and the details of the affair are admirably set out in a Times archive blog. There it is noted that "the tone of the Army statements shows an extraordinary lack of awareness of the real nature of the struggle they were engaged in."

In a struggle that was about to be launched into a whole new phase and was to drag out for more than two decades before a resolution even began to look feasible, Brigadier Marston Tickell, the Army chief of staff in Northern Ireland, was claiming that the hard core of the IRA had been "virtually defeated".

Looking back at those events, even at the time - as we saw them recorded in our newspapers and on our TV screens – the Army's optimism seemed delusional. But what was less evident was the brutality with which the Army – or some sections of it – was operating.

However, almost immediately after the internment programme had been implemented, reports started to come in of Army mistreatment of prisoners. On 17 August, allegations were published that soldiers had urinated on prisoners, subjected them to electric shocks and threatened to hurl them from helicopters.

What was so significant, though, was that even as detailed allegations of troops' brutality continued to be made, most Army officers were prepared only admit that their soldiers had been "brisk" in their handling of Irish civilians. They largely believed – as did most of us - that many of the allegations being made were so totally out of character with British troops' behaviour as to be "ludicrous".

As it turned out, the allegations were very far from being ludicrous and, as the evidence mounted, they served to poison the image of the British Army in the eyes not only of the Roman Catholic community here and of a large section of the population of the Irish Republic, but also in overseas countries and particularly in the United States. That was not only to do a great deal of damage, but was also directly to prolong the conflict.

Thus are the "Ballymurphy Massacre" relatives currently saying that, had their allegations been taken seriously at the time and acted upon, then maybe Bloody Sunday might never have happened. The corrective action would have been taken, and history would have been changed.

But it is an Irish columnist, Kevin Myers, who puts his finger on the issues, noting that Bloody Sunday, was not unique: it was merely an extravagant example of what the Parachute Regiment was already doing - and would continue to do - in Northern Ireland.

Something like 90 percent of clearly unlawful army killings throughout the Troubles were by the three battalions of the Parachute Regiment. Both Catholic priests who died in the Troubles were shot by the Paras and were, to his mind, murdered.

Other Para killings included shooting dead Patrick Magee, an innocent 20-year-old student teacher on the steps of St Comgall's school on the Falls Road as he left teaching practice. The same day, the Paras shot dead one-eyed Patrick Donaghy, aged 86, one of the oldest victims of the troubles. He was killed as he stood at his window, eight storeys up in Divis Towers.

The real crime, Myers says, was not just the killings that Lord Saville has been investigating in his insanely wasteful enquiry, but the tolerance of the Parachute Regiment's conduct by both the British army and successive British governments. He continues:

That is the real mystery. Because the IRA had no better friend than the Parachute Regiment; wherever the Paras went, IRA recruitment subsequently rose. The price to be paid for their random and reckless brutality was the lives of other soldiers and the many, many more civilians killed by the IRA.

So why wasn't it stopped? Why, asks Myers, was the Parachute Regiment deployed in Northern Ireland and why was its often evil conduct tolerated?

Here, we have the clue in the response of Army officers to accusations of brutality – a belief that they (the accusations) were so totally out of character with British troops' behaviour as to be "ludicrous".

This is the politics of delusion, the determination to believe what you want to believe, a rejection of anything which might contradict the received wisdom and what I call "constructive ignorance", a wilful, culpable refusal to seek out any information which might challenge the preferred narrative.

And this is why, contrary to the genuine expectations of commentators such as Subrosa, there can be no real closure, partial or otherwise. The system has been caught out but there is no real contrition, no acceptance of blame and no real change. Delusion is still a powerful policy driver, pervading every nook and cranny of government.

This is evident in the likes of Iain Dale, who seems to prefer the idea that Bloody Sunday was an aberration, with "merely a small part of the British armed forces" at fault that day, and even Owen Paterson, who has agreed to meet the Ballymurphy campaigners, cannot offer a remedy to the underlying ailment.

Slugger O'Toole believes that the publication of the Saville report heralded a good day for reconciliation, others would castigate Tony Blair even for allowing the Saville Inquiry, calling him "insane" for agreeing to it, and Daniel Finkelstein insists that the soldiers are treated with the same leniency as the IRA, thus not even beginning to understand the issues.

Martin Meenagh thinks the greatest unindicted villain of the piece was Edward Heath. Lurking behind the Paratroopers' action that day is the general fuhrerbefehl he issued, to show the natives who was in charge. Meenagh may not be wrong.

Jim Greenhalf, on the other hand, reminds us that sometime this week, next week, the death toll of British soldiers in Afghanistan will reach 300. The ultimate political result when we pull out next year, or the year after, will be "job well done", as it was after we left Iraq, which cost us 179 dead soldiers, he says.

And that will be another delusion, to sit alongside the delusion that the British Army is a saintly (and competent) institution that can be relied upon to do the job and do it well.

If nothing else, Saville has challenged that, although the wider lessons have hardly begun to be appreciated. But, if we the public, in general, and the politicians and military in particular, believe that Saville applies only to Bloody Sunday, that will be another delusion.