The more we pay, the less we get 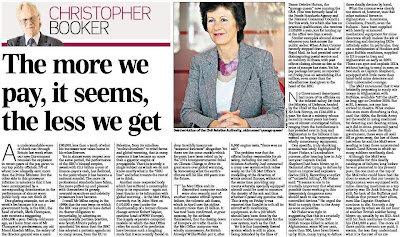 So often these days, the point made about public sector salaries is that, to compete with the private sector and to be able to hire the best, huge sums of money must be paid.

Notwithstanding that a considerable number of people in the private sector are grossly over-paid, the point made by Booker in his column this week is that the grotesque inflation of salaries has gone hand in hand with a deterioration of almost every public body. We've all heard the old saw, "pay peanuts, get monkeys" but we are paying gold bars and getting monkey droppings.

One glaring example of this, notes Booker, is the BBC, the head of which, Mark Thompson. He now receives a staggering £834,000 a year yet, twenty-odd years ago, the director-general was paid a mere £80,000. Yet in almost every respect over the same period, the performance of the BBC's bloated empire, awash with £3.5 billion a year of licence-payers cash, has declined, to the point where it has become a national scandal.

The more its professional standards have fallen, the more puffed-up and pleased with themselves its grossly overpaid executives and celebrity presenters have become.

Another once-respected body which has suffered a catastrophic drop in its reputation is the Met Office, currently run by John Hirst. He gets £170,000 a year to preside over the hugely expensive computer models that have become such a laughing stock that it was recently forced to drop its wildly inaccurate "seasonal forecasts" altogether.

Yet these are the same models which for years have been relied on by the IPCC to drive its great scare over global warming, by forecasting what the earth's climate will be like 100 years into the future. The Met Office and its discredited computer models were also recently part of another massive official system failure, the volcanic ash fiasco, which in April cost the airline industry more than £2 billion.

But the real problem here was that the official bodies responsible for air safety, including our own Civil Aviation Authority, were relying solely on the Met Office's modelling – all under the aegis of "quango queen" Deirdre Hutton, receiving £130,000 a year, just for turning up at the office two days a week.

Another example of casting pearls (or gold bars) before swine is Adam Crozier. Having recently stepped down as head of Royal Mail, he had presided over a disintegrating postal service and an industry in chaos, with post offices closing almost as fast as the price of stamps has risen. Yet his pay package last year was an astonishing £2.4 million.

Strangely though, the department with the most officials on the inflated-salary list is the Ministry of Defence, headed by the Chief of the Defence Staff, Sir Jock Stirrup, on £245,000 a year.

Yet, writes Booker, this is a ministry whose record in recent years has been one of almost unmitigated failure, ranging from the humiliations it has presided over in Iraq and Afghanistan to the billions it has wasted on buying inappropriate or wholly unnecessary equipment.

Unlike the loathsome Hutton, who simply milks the system and leaves others to do the work, people like Stirrup on his inflated salary are responsible for the lives of personnel under their command. And, in Afghanistan, where eighty percent of the casualties are from IEDs, nothing characterises the campaign more than the failure of British forces to get to grips with this threat.

With more senior officers employed, pro rata than ever before in the history of the armed forces, at salary levels never so high, we have a situation where we are less well equipped to deal with the threat than we were 20 years ago, when with officers on a fraction of the current rates, Britain was leading the world in protection equipment and systems. Thus, as our capabilities have degraded, so have the wages increased.

At the heart of that very obvious failure is the Chief of the Defence Staff, the one man with sufficient clout to over-ride the petty jealousies, back-biting and incompetence of people like Gen Dannatt (who is now a Tory defence advisor), who could have ensured that the right equipment reached theatres.

Yet, even though the MoD announced that it was belatedly proposing to equip our troops in Afghanistan with Buffalos, available "off the shelf", as long ago as October 2008, they still have not arrived – but Stirrup just goes on being paid his £245,000 a year – plus perks.

So it is, Booker concludes, the more all these public servants are paid, the less they understand what it is the rest of us are paying them for.