Slime shall feed upon slime 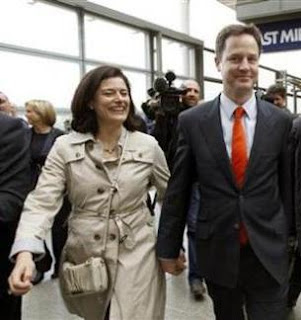 It is so comforting to see the Cleggerons maintain the standards set by their predecessors, the Blairs, whose probity was unparalleled and their concerns for self-enrichment public service beyond measure.

But, of course, there is absolutely nothing wrong with Miriam Gonzalez - the City lawyer who just happens to be married to deputy Cleggeron leader Nick Clegg - joining the board of Spanish infrastructure group Acciona.

And the fact that this group specialises, amongst other things, in developing wind farm sites will have no effect on the thinking of Nick Clegg. He is after all already supportive of this stupidity, rather like his boss, the Boy Cameron.

One thing for sure, though - the very tidy income the Cleggies now pull in will allow them to weather the financial crises that they and their ilk have helped create. Hardship, like rules and taxes, is for the little people. The slime look after themselves.