A travesty of justice 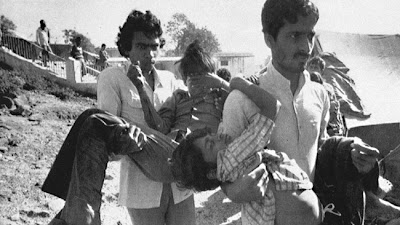 For all the hyperventilation and anti British rhetoric by the American greenies over the Deepwater oil spill, they do at least have in BP a company that has devoted considerable resources and expense to dealing with the ensuing crisis – and which has taken full responsibility for the damage done by er .... US drilling contractor Transocean.

However, with a criminal investigation now in the offing, it is perhaps apposite to note the outcome of a trial in Bhopal Magistrates' Court yesterday.

This comes twenty-six years after the world's worst industrial disaster, on 3 December 1984 when 3,500 people died immediately and over 15,000 in the days afterwards when a giant poisonous cloud of methyl isocyanate leaked from the factory and rolled into a neighbouring slum.

Now, seven former managers of Bhopal's Union Carbide pesticide factory have been found guilty of causing death by negligence. But, because the charges pursued against the executives were reduced by the Indian Supreme Court in 1996 from culpable homicide to death by negligence, the local court could only hand down a maximum sentence of two years in jail (see video report below).

Even then, the guilty men were able to leave the court after a few hours, armed with bail orders after furnishing bonds of 25,000 rupees and personal sureties of the same amount (totalling about £700 each).

Victims' relatives and activists protested that the verdict was a travesty of justice and an insult to those who died. They say up to half a million people have had their health affected, including children who continue to be born with disabilities. "For 25 years we waited and now after two hours this morning these men have effectively been set free," said one relative.

And, after all those years, there is toxic waste still on the factory premises. The state government has failed to remove huge quantities of chemicals and pesticides from the factory and its evaporation pond nearby.

No concrete steps have ever been taken to remove or detoxify the waste and, while the Supreme Court has recently ordered that the 300 tons of packaged waste should be disposed of at the district disposal facility, the incinerator there has just begun its trial run.

But what is most remarkable about this whole affair is the treatment of Warren Anderson, chairman of the US-based Union Carbide Corporation at the time of the incident. Three hours after he had been arrested amidst high drama in 1984 on the charge of causing death by negligence, a mysterious phone call to the then chief minister of the state government secured his release on a personal bond of Rs 25,000 (£350).

Anderson was put on a state government aircraft and flown to New Delhi. In his bond, Anderson promised to return to India to stand trial in the case whenever summoned. He never did. The courts failed to get him extradited and the Government of India has admitted it was impossible to bring him back. Today, he is an absconder, the only accused in the criminal case against the Union Carbide to escape trial.

Now 89, Anderson lives in luxurious retirement near New York, having taken no personal responsibility for the disaster.

With US protesters now calling for the prosecution of BP chief executive Tony Hayward , a British citizen who has been at the centre of the clean-up efforts, they perhaps should be looking a bit closer to home before they start shrieking - as they are doing - about wanting justice.