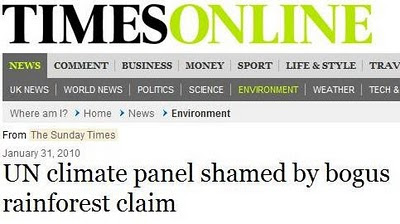 On 31 January, The Sunday Times published an article headed "UN climate panel shamed by bogus rainforest claim", the essence of which was reproduced in this post. This launched "Amazongate" in The Sunday Times, the substantive article was being based largely on work published in this blog, in two posts here and here, which must be read together.

The details were also published in the Booker column and had previously been published elsewhere, including Watts up with that.

Subsequently, one of persons cited in the ST article decided to complain to the press complaints commission. In last weekend's edition, the newspaper chose to issue an "apology" and has removed the original article from its website.

No complaint, to my knowledge, has been made to The Sunday Telegraph, nor to any other newspaper or blogger who carried the piece – nor, significantly, to myself directly.

And, although the complaint was clearly supported by the WWF – which had most to lose from the criticism – no complaint was made about several more articles, including further references in the Booker column, plus these pieces here, here and here.

Had the WWF sought direct confrontation with myself, or Booker in The Sunday Telegraph, it would have received a robust response, but the complaint was directed at the weakest link, The Sunday Times, which had made some errors in attribution.

Although these errors did not affect the substance of the case, the paper has chosen to go far beyond that needed, and conceded that "the IPCC’s Amazon statement is supported by peer-reviewed scientific evidence." This simply is not true.

However, the central falsehood having been endorsed now by The Sunday Times, this has been sufficient for the WWF to declare a victory and cut and run, thus displaying the corporate cowardice and mendacity that one would expect of this odious organisation.

The "usual suspects" have climbed on the bandwagon, with The Guardian, New York Times and NDTV having pitched in.

Interestingly, Delingpole, who also ran the Amazongate story, writes in his latest post that when dealing with the Warmist lobby, always remember these helpful tips: sup with a long spoon, know that they're lying from the fact that their lips are moving, and when they leave, make sure to count your fingers and your silverware.

Know also that they are cowards (and bullies), incapable of taking on a direct challenge and dealing with it honestly.