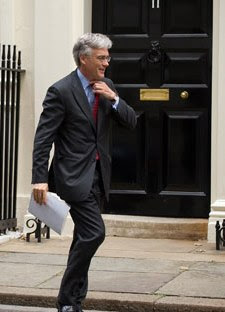 Lord Adair Turner, chairman of the Committee on Climate Change (pictured), has - we are told - written to the energy secretary asking that the Carbon Capture and Storage (CCS) competition be extended to include gas as well as coal projects.

The committee is saying that efforts to tackle global warming require reducing emissions from electricity generation to almost zero by 2030, which should rule out new conventional gas-fired power stations after 2020.

Rightly, Ian Parrett, at energy analysts Inenco, says the costs could represent a "push too far ... a step too far and too soon." Adds Parrett: "We're going to need to rely on gas-fired generation for some time to come and we'll need every megawatt we can get hold of." And indeed that is the case. To hamper gas with CCS would have a devastating effect, massively increasing costs and complexity of electricty production.

Thus, Turner is either barking mad, or something much worse. This is something very much akin to economic sabotage – a deliberate ploy to impoverish the nation and many of its citizens. But with Huhne at the receiving end, and the greenie obsessed Boy, there is no certainty that this will be dismissed out of hand, as it should be.

But there can be no doubt about what a sensible, responsible government should do (which is why it will not happen). It should abolish the committee on climate change, as a quango created by Labour, and put Turner out to grass – i.e., fire him, and in as humiliating a fashion as possible. Then it should fire Huhne ... although Turner would be a good start.

Tim Worstall, though, gives a more considered and altogether more interesting and detailed view - coming, as far as I can see, to much the same conclusions.

I could suggest shooting Turner, but that is altogether far too passé - and I don't want plod on the doorstep claiming I'm inciting murder (even if what Turner is suggesting will end up killing people by the hundred thousands ... that's OK - wholesale slaughter of the plebs is entirely permissible if you are above the line).