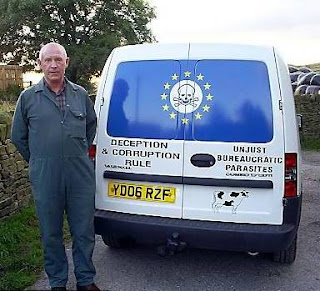 "Mole population soars due to poison ban," writes Laura Roberts for The Daily Telegraph, telling us that the mole population has soared across Britain due to the ban on the poison used to kill them. Pest controllers (sic) have said they could number up to 40 million although the most recent estimate is currently 33 million.

What the lovely Laura doesn't tell us, though, is that the poison concerned – strychnine – was banned by the loathsome EU, on 1 September 2006. This intelligence also evades Emily Dugan, who writes a similar story in The Independent - so similar in fact that it probably came from an agency report, which doubtless also didn't mention the EU. And without the prompt, the little girlie reporters wouldn't know diddly squat about where the ban came from.

Funnily enough, local papers have covered the story, not least the Oldham Chronicle. Last year it told the tale of Peter Brown, the "mole man" who had his business wiped out by the ban and took to the road with a suitably decorated van to express his views of his tormentors.

Peter staged many a protest outside Oldham MEP Chris Davies' office as well as writing countless letters, which got him precisely nowhere – as one might expect. He then resorted to painting "deception and corruption rule" and "unjust bureaucratic parasites" on his van in a bid to spread the message of his protest as far and wide as possible.

But, a year on, he reckoned without the girlies of the national papers, who have about as much idea of how the government works and who actually rules us as "Call me Dave". Confronted with ignorance such as that, there is no hope and no solution. The girlies - of both sexes - are taking over.