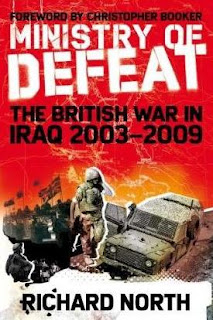 I didn't realise how big The Times was running the Afghan story until I saw the full newspaper today – then to see that it was the main theme of the day, complete with the lead editorial headed: "Institutional Denial".

There, we are gravely told that: "The politicians have deserved criticism about Afghanistan. An investigation by The Times shows that senior military personnel cannot escape blame either." And, just to cement this in, we get a comment piece from Anthony Loyd who tells us that the findings:

... reverse much of the received wisdom that the Labour Government, stingy in every allocation of manpower, resource and equipment, spendthrift only in soldiers' lives, was solely responsible for the misfortunes endured by our Army in Helmand.

Well, excuse me! It may have been your "received wisdom", but it wasn't mine. In this blog and the sister blog, Defence of the Realm, I have consistently – and almost entirely on my own – been writing posts like this and many more about the inadequacy of our general staff and their roles in the disasters of Iraq and Afghanistan.

Thus, while the media was having wet dreams about the saintly Dannatt, and the blogosphere and media alike – along with the Tory opposition and its claque - was chanting "under-resourced" and "over-stretch", I was telling a completely different story.

Even then, it was in April last year that I finally finished Ministry of Defeat which embodies much of what The Times is saying today, but also much, much more, about Iraq and Afghanistan.

And did The Times review the book? Apart from Thomas Harding of The Daily Telegraph, did any defence correspondent take a blind bit of notice of it, or bother to review it? Did any of the clever-dick political blogs which were sooooo voluble about the underfunding, etc., etc., have a look and change their thinking?

For months now, my publicist and publisher have been telling me that the book - which has actually done quite well despite the lack of publicity – was ahead of its time, running themes that are only now beginning to make an appearance, which people are now only beginning to recognise. They could have read it a year ago in the book, and years before that on the blogs. But they were far too grand and clever to do that.

Significantly, Michael White in The Guardian today notes how The Times is rewriting the political narrative. But he observes that the "interesting shift" may reflect a diminished enthusiasm for beating up elected politicians over defence policy when they are Tory, not Labour.

That, of course, is what it was really all about. The media, the political classes and the claque were not interested in the performance of the military, per se or what was really going wrong. The problems had a utility only in that they presented an opportunity to attack the Labour government. And if that meant supporting – and applauding – inadequate generals, while their troops died, so be it.

Says White, the refocus on professional errors is a useful corrective. The top brass has been unusually vocal in attacking Labour's military failures in office – think General Sir Richard Dannatt, whose advice seems to have been quietly shelved by the incoming government now that he's served his purpose as a high-profile defector from the ranks. Now its own role is being more closely examined.

So yes, I am angry – bloody angry. The time, the effort, the skill, and the risks taken by some really serious people in the background who kept me informed and told me what was really going on, went largely to waste - because what people really wanted was a stick to beat the government. And dead soldiers were as good a stick as any to exploit.

While a fundamentally unserious media played its games, men died unnecessarily. Too late were the failings of the generals realised - but they were not "realised" earlier because no one wanted to know. It was not politically convenient.

Britain's soldiery have had it bad these past seven years of war, writes Loyd. One of the burdens under which they labour was that: "among their generals lurk donkeys in disguise." "Carelessness, arrogance and a reluctance to learn from the mistakes of Iraq appear to have shadowed every step of the Army's planning for the Helmand mission."

As I say, a bit bloody late to start pointing that out now. Where were you four years ago?