Reuters is playing its games again, manipulating pictures - this time cropping images to remove incriminating evidence (click on the pic to see what they left out).

And then you have that idiot Hague call on Israel to agree to a "credible and transparent" investigation into this "deadly raid" on an aid flotilla as activists whose ship was blocked from delivering relief supplies to Gaza returned home today.

Speaking alongside Bernard Kouchner, the foreign minister for the Kermits, Hague said there should be an "international presence at minimum" in an inquiry into the deaths of nine "activists". No doubt he too would be happy to see Reuters processing the evidence for such an inquiry to use. 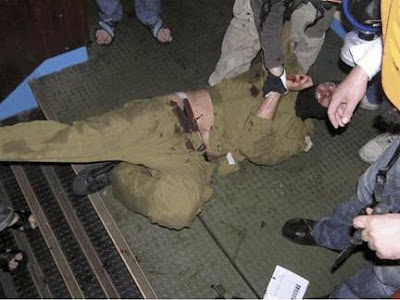 One thing is for certain though ... Reuters little games are not going to be reported by the MSM. As with Qana, they will close ranks and pretend it never happened. The Daily Telegraph, for instance, in today's print edition, has the cropped version of this photo (above).

While the original clearly showing the knife in the right foreground, the Reuters version omits this detail but the Telegraph crops the frame even tighter (below), giving not the least hint of the presence of a knife - attributing the pic to Reuters. 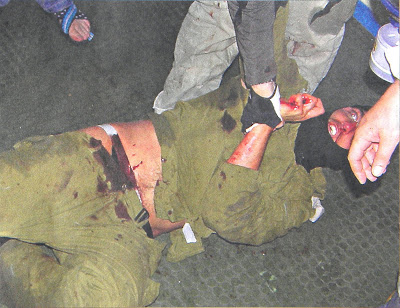 Reporter Adrian Blomfield, then commenting on the picture, notes that the soldier's uniform is "splattered with blood" and "he appears to have been dealt a blow to his nose", completely ignoring what appears to be abdominal bleeding, compatible with a knife wound.

Then, without a hint of apology or correction, the uncropped version appears online, this time attributed to AP rather than the Reuters attribution in the print edition. The incredibly bland caption reads: "An (sic) wounded Israeli soldier on the Mavi Marmara".

Never can it be admitted by this paper or the rest that the photographs they use are routinely manipulated - as is the written copy - all to ensure that the "great unwashed" are only told the "right" things. But for the "derivative" blogs, nothing of this would reach the wider public.

PROVOCATION THREAD
Posted by Richard at 00:03