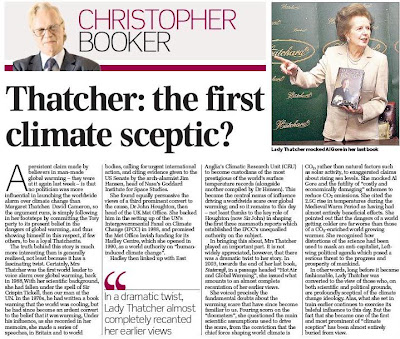 Booker was away in France for most of last week, giving him little time to prepare a column, which left him to come up with a "this is one I prepared earlier" story about "the first climate sceptic", Margaret Thatcher.

The story, nevertheless, is very much one that needed to be done. As with the euroslime who constantly want to "own" Winston Churchill, and have him supporting a united Europe (he did, but he didn't want Britain to be part of it), the warmists are keen to claim Thatch as one of theirs, the politician who launched the worldwide alarm over climate change.

This then allows them to claim that The Boy is simply following in her footsteps by committing the Tory party to its present belief in the dangers of global warming, and thus showing himself in this respect, if few others, to be a loyal Thatcherite. Booker though has bottomed out the truth, which is much more interesting than is generally realised.

Thatch certainly was the first world leader to voice alarm over global warming, back in 1988. With her scientific background, she had fallen under the spell of Sir Crispin Tickell, then our man at the UN. In the 1970s, he had written a book warning that the world was cooling, but he had since become an ardent convert to the belief that it was warming.

Under his influence, as she recorded in her memoirs, she made a series of speeches, in Britain and to world bodies, calling for urgent international action, and citing evidence given to the US Senate by the arch-alarmist Jim Hansen, head of Nasa's Goddard Institute for Space Studies.

She found equally persuasive the views of a third prominent convert to the cause, Dr John Houghton, then head of the UK Met Office. She backed him in the setting up of the UN's Intergovernmental Panel on Climate Change (IPCC) in 1988, and promised the Met Office lavish funding for its Hadley Centre, which she opened in 1990, as a world authority on "human-induced climate change".

Hadley then linked up with East Anglia's Climatic Research Unit (CRU) to become custodians of the most prestigious of the world's surface temperature records (alongside another compiled by Dr Hansen). This became the central nexus of influence driving a worldwide scare over global warming; and so it remains to this day – not least thanks to the key role of Houghton (now Sir John) in shaping the first three mammoth reports which established the IPCC's unequalled authority on the subject.

In bringing this about, Mrs Thatcher played an important part. It is not widely appreciated, however, that there was a dramatic twist to her story. In 2003, towards the end of her last book, Statecraft, in a passage headed "Hot Air and Global Warming", she issued what amounts to an almost complete recantation of her earlier views.

She voiced precisely the fundamental doubts about the warming scare that have since become familiar to us. Pouring scorn on the "doomsters", she questioned the main scientific assumptions used to drive the scare, from the conviction that the chief force shaping world climate is CO2, rather than natural factors such as solar activity, to exaggerated claims about rising sea levels.

She mocked Al Gore and the futility of "costly and economically damaging" schemes to reduce CO2 emissions. She cited the 2.5C rise in temperatures during the Medieval Warm Period as having had almost entirely beneficial effects. She pointed out that the dangers of a world getting colder are far worse than those of a CO2-enriched world growing warmer.

Thatch also recognised how distortions of the science had been used to mask an anti-capitalist, Left-wing political agenda which posed a serious threat to the progress and prosperity of mankind.

In other words, long before it became fashionable, Lady Thatcher was converted to the view of those who, on both scientific and political grounds, are profoundly sceptical of the climate change ideology. Alas, what she set in train earlier continues to exercise its baleful influence to this day. But the fact that she became one of the first and most prominent of "climate sceptics" has been almost entirely buried from view.