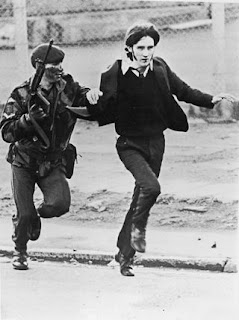 Simon Hoggart in The Guardian today recalls how he had had published in his newspaper six days before "Bloody Sunday", a story headed "The Brutal Soldiery".

In the article, he had made specific allegations about the conduct of the Parachute Regiment and had asserted that some Army units were so fed up with the Paras storming into their areas, firing rubber bullets, beating people up, and undoing months of improved community relations in 10 savage minutes, that they had asked for them not to be sent in again. "Thugs in uniform," one officer had called them.

The article, says Hoggart, caused a great furore, even though he did make it clear – as he was later to do in oral testimony to the inquiry - that the Parachute Regiment was one of enormous skill, enormous courage and enormous resource, but not entirely appropriate in a civilian setting.

Rather than any of the allegations being investigated, though, they were flatly denied. Hoggart and his newspaper "were frozen out for months by the military". He was thought to be in the pocket of the IRA.

From the written evidence submitted to the Saville Inquiry, we can see precisely how the establishment reacted, with Army public relations complaining to Hoggart's boss that even to produce such an article was "unethical and unprofessional conduct."

We can also see that the Army actively considered launching an "attack" on the journalists in the papers Belfast bureau, although it noted that it did not have "enough concrete evidence" against one, who had "covered his tracks very carefully." "However," it went on to say, "Hoggart is professionally vulnerable as a result of his unethical conduct."

Nor were the politicians any better. From the undersecretary of state came the view that there was a "growing feeling" that soldiers were talking too much to the press. HQ Northern Ireland also issued a general warning against any approach from Guardian journalists.

Sadly, one of the observations recorded by Hoggart had been from an Army officer who had told him (of the Paras): "I have seen them arrive on the scene, thump up a few people who might be doing nothing more than shouting and jeering, and roar off again ... They seem to think that they can get away with whatever they like."

It appears though, that the rejection of Hoggart's charges stemmed for a more nuanced position than just a simple, outright refusal to believe them – and anything bad of the Paras. This is hinted at by 1 Para's then adjutant, a certain Captain Mike Jackson – who was to become in 2003 the CGS as General Jackson.

Back in 1972, he dismissed the report as "designed to be divisive", adding: "This is not a realistic picture of the relationship between the Paras and other units in Belfast. We are here to give operational assistance, and we shall continue to do so."

The position is explained more fully in an article by T E Utley published in The Sunday Telegraph on 23 April 1972, nearly two months after Bloody Sunday. He then claimed:

The strategy of the civil rights movement henceforth [that is in context in the autumn 1971] was to keep up a sustained, efficiently directed propaganda campaign, not only against internment, but also against the Army as such. The most vulnerable targets for that campaign were the paratroopers who had been brought into Ulster to act as a reserve force for employment in emergencies that required quick reaction and tough tactics.

On 14 January, two weeks before the shootings, Richard Cox, then defence correspondent for The Daily Telegraph had "alerted his readers to the next phase in this propaganda chain." He had claimed that Irish journalists were seeking to entrap officers of other regiments into admitting that the use of the Paras in Ulster had been disastrously counter-productive.

In effect, therefore, the allegations against the Paras were all part of an IRA propaganda campaign and could safely be ignored. Thus, almost exactly 30 years later, the first soldier to give evidence to the Saville Inquiry was to describe the Paras as a "jolly good" unit.

This was General (then Brigadier) Frank Kitson, in January 1972 the commander of 39 Brigade, of which the 1 Para was part. In his oral evidence, he told the Saville Inquiry:

If some people in Northern Ireland associated 1 Para with a reputation for toughness and brutality, I think they were mistaken. The regiment's reputation in this respect was probably fuelled by its effectiveness in controlling difficult situations. By their resolute action they often prevented situations escalating into violence between the Catholic and Protestant communities which was the one thing above all others that we wished to avoid, because it provided an excuse for gunmen to present themselves as defenders of their local community. I believe that 1 Para's effectiveness in this field contributed greatly to the saving of life.

Hoggart, however, takes "a little satisfaction" in the Saville Inquiry finding that he was right. He was in Belfast on Bloody Sunday and, he writes, "everyone realised instantly what a terrible turning point it would be ... Even the army immediately realised what had happened."

For the IRA, says Hoggart, it provided in an instant all the moral justification they needed to kill as many people as they pleased. Every victim of the Paras, shot while crawling down the streets of Derry, carried dozens more people with him to the grave.

But, if the Army had realised this, there was still the charade of the Widgery Inquiry later in 1972, when the cover-up was cemented into place. And a few months later, the CO of 1 Para, Lt-Col Derek Wilford, a man now criticised by the Saville Inquiry, was awarded an OBE.

The meaning of the signal sent to the Irish by that award is obvious. The Paras were a "jolly good unit", and no amount of killing was going to change that.