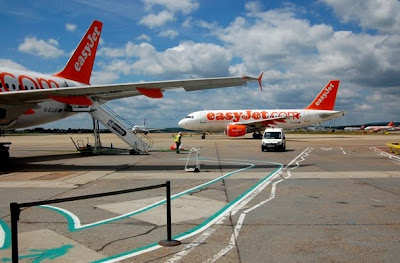 Technology may be about to resolve the problem of volcanic ash, thus rescuing the hard-pressed airline industry – which is as it always has been. This is through the use of a system called AVOID (Airborne Volcanic Object Identifier and Detector), which has been around for some time, but has never previously got off the ground – so to speak.

The equipment – in essence, modified infra-red detectors which can pick up volcanic dust clouds, relying on their IR absorbency characteristics – is to be trialled by easyJet, which has put £1 million into a research pot in the hope that its use will minimise future disruption from volcanic ash.

These data provided by the kit will, in theory, enable pilots to detect ash clouds up to 62 miles (100 kilometres) ahead of and at altitudes between 5,000 and 50,000 ft, allowing pilots to make adjustments to flight paths if needed. Data can also be transmitted to a ground station, allowing real-time plots of ash-clouds to be built up, reducing the reliance on Met Office predictions.

The technology had yet to be fully validated for commercial use, much less approved by safety regulators, but the attempt by easyJet to find a solution makes for a interesting contrast with the Civil Aviation Authority, which is actually charged with the job of ensuring the safety of UK airspace.

Its chief executive, Andrew Haines, commends easyJet for investing in the trial and "welcomes the fact that airlines are considering innovations such as this". Haines adds that the CAA will "do all we can to facilitate them," perhaps in the knowledge that a successful trial will get his useless organisation off the hook.

In fact, Haines still seems to be more interested in defending the CCA and its decisions to close sections of UK airspace. We could have "wet a finger and taken a punt with the weather" or sought proper solutions, he says, once again relying on the canard that: "There was no information from aircraft manufacturers about what was a safe level of ash."

"Until we could get a clear assessment, we were absolutely justified in taking the actions we took," the man claims. "Otherwise it would have been a case of keeping our fingers crossed and I don't think anyone would have thanked us for that."

Even more extraordinarily, as recorded by The Guardian, Haines has the nerve to accuse the industry of "buck-passing" by attempting to blame regulators for the ash shutdowns.

Thus, his welcome for this easyJet initiative is actually couched in terms the industry catching up, with Haines saying: "I very much hope that this is a sign that the industry is ready to play its part in finding a fundamental solution ... rather than pretending that the problem does not exist."

And there you have the classic divergence in attitude. The industry, which has to keep the show on the road in order to make money, gets on with finding solutions to problems, while the regulator concentrates on covering its own arse and bitching that the industry has not been doing enough.

For that, incidentally, Deirdre Hutton, the part-time chair of the CAA, gets paid £130,000 per annum for a two-day week. Nice work if you can get it.