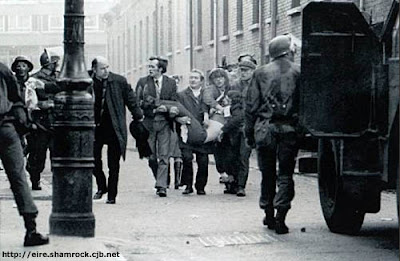 Too quickly it seems, Dannatt is getting his way: the media is moving on from the Saville Report – although the Sundays may return to the issue. But, with over £190 million spent on the damn thing, the very least we should do is get our money's worth from it.

Thus, before we leave the issue for the time being – doubtless to return at some time in the future – I feel impelled to offer a few more observations, not least a suggestion that too many of the current pundits seem to be missing the point, the very point I made in my original piece about 1st Para, a Regiment which has a proud history of "killing people and breaking things".

But, by no means all of the pundits are missing the point. In The Independent there is Robert Fisk, who writes:

We knew the First Battalion, the Parachute Regiment. "Tough" was the word we reporters used if the soldiers were beating up rioters. Brutal was the word we should have used. But sometime towards the end of 1971, I think we all realised that the Parachute Regiment was being prepared for some pretty nasty confrontations. They were the hard men, the reserve battalion at Palace Barracks, Holywood, a boring seaside town on the south side of Belfast Lough, a unit that spent most of its time waiting for trouble.

If that is from one end of the political spectrum, though, we also have Max Hastings, writing in The Daily Mail, who was in Derry on Bloody Sunday. From him we get:

An English reporter friend of mine that day in Derry found himself trapped among demonstrators and rioters. He asked a soldier manning a barricade if he could squeeze past their line to find safety behind the troops. "No, you bastard!", snarled the squaddy. "You stay there and take what's coming to you."

At that stage, mid-afternoon, only CS gas and rubber bullets were being used. But I myself met Paras preparing to conduct the planned "scoop-up" operation to arrest rioters, who were obviously spoiling for action. The Paras are a great military institution, but quite unsuited to peacekeeping. They are a fighting regiment, and that day they expected and wanted to fight.

Hastings, the terribly grand former Daily Telegraph editor, is the man who writes with the authority of "being there", and is therefore treated with great respect. But he nevertheless talks a great deal of tosh, as when he tells us: "The Army, enraged by terrorist killings, was in a savage mood, and still relatively new to the restraints essential for counterinsurgency."

Here the point is that, virtually since the end of World War II, the British Army had been doing little else but counterinsurgency, and no more so than 1 Para. Formed on 15 September 1941, the battalion operated in Haifa during the Palestine Mandate until British troops withdrew in 1948. It was then temporarily disbanded on return to the UK but reconstituted in 1949.

From mid 1951 to 1954, it saw active service in Cyprus, the Canal Zone in Egypt and during counter-terrorist operations against EOKA in Cyprus in 1956. It participated in the Suez landings during the crisis in November, before being back in Cyprus in 1958. Between 1962-3, the battalion served in Bahrain, in early 1964 undertook a UN peace-keeping in Cyprus and in 1965 and 1966 was back in Bahrain. The battalion covered the eventful withdrawal from Aden in 1967 after 127 years of British rule.

The first of its 12 Northern Ireland Op Banner emergency tours began at the end of 1969, two years after it had left Aden – at which time the use of firearms in riot control was standard procedure. 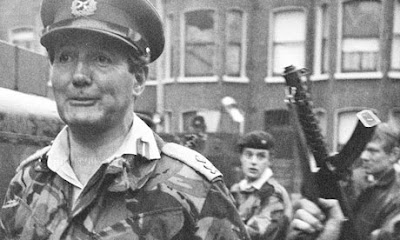 Much is made (not least by The Independent) of the evidence of General Ford, commander, land forces in Northern Ireland (pictured above). He revealed to the inquiry that in 1971 he was "coming to the conclusion that the minimum force necessary … is to shoot selected ringleaders among the Derry young hooligans after clear warnings have been issued".

In other words, wrote Ford, "we would be reverting to the methods of IS [internal security] found successful on many occasions overseas" – precisely the methods 1 Para would have been trained to use in Palestine, Egypt, Cyprus and Aden. Thus, with its reputation, background, experience and training, it would have been entirely predictable that committing 1 Para to the pressure cooker of Londonderry in January 1971 would have produced a violent outcome.

And "pressure cooker" it was. On 8 July 1971 in Derry's Bogside two rioters, Seamus Cusack and Desmond Beattie, had been shot dead by soldiers in disputed circumstances.

The military had claimed the pair were armed, which had been denied by local people. Moderate nationalists including John Hume and Gerry Fitt walked out of the parliament of Northern Ireland in protest. A British Army memorandum stated that as a result of this, the situation "changed overnight". The Provisional IRA's campaign in the city beginning at that time after previously being regarded as "quiescent"

In January 1972, to all intents and purposes, violence is what the Army and the media expected, as indeed did the politicians. Heath apparently told his cabinet committee on Northern Ireland that: "As to Londonderry, a military operation to re-impose law and order would be a major operation necessarily involving numerous civilian casualties."

Where the failure came, therefore, was in not realising the political implications of such violent scenes, spread over the pages of the newspapers and on the TV screens. 1 Para would have done much worse in Aden and elsewhere, but not in the full glare of the media.

Journalist Kevin Cullen was later to write (now two years ago): "Over the years, I met dozens of men who joined the IRA because a British soldier harassed or humiliated them or their families." He went on:

Thirty-six years ago this week, the army rounded up hundreds of Catholic men and teenagers, few of whom were actually in the IRA. Far from smashing the IRA, the army's overzealous policy of internment without trial infuriated the entire nationalist community.

And in 1972, when British paratroopers killed 14 unarmed demonstrators in Derry on Bloody Sunday, the IRA was flooded with recruits. Half of the more than 3,500 people killed in the Troubles died in the fury of the five years that followed Bloody Sunday.

From General Michael Rose, we get confirmation of this. On Bloody Sunday, he says, it was absolutely clear that in exchanging fire with the terrorists, the British Army had fallen into the trap laid for them by the IRA, who had set out that day to commit murder and mayhem, caring nothing for the lives of their own republican supporters. Claims Rose:

Indeed, I believe it was their specific aim to get as many people killed as possible. For the deaths would serve as a ruthlessly cynical recruiting tool. As the news of the dead in Londonderry that day spread around the world, the result was much the same as Irish people everywhere rallied to the nationalist cause. In Northern Ireland, in the Irish Republic and in the US, thousands of young men and women joined the IRA.

And all of this puts the focus up the chain of command, into the high level military and political arenas, where – clearly – tactical and strategic errors were made in terms of the conduct of the campaign.

The other day, I wrote about the battle of Dien Bien Phu being lost not in the little valley in Viet-Nam's highland jungles but in the air-conditioned map room of the French commander-in-chief.

By the same token it seems to me, the slaughter of Bloody Sunday happened through the failures of the military brass and the politicians to appreciate the special demands of a counterinsurgency campaign in Northern Ireland. One has to marvel at the political naïvety.

What did the Army really think would happen, with the media camped on the doorstep and TV cameras on permanent standby, if they started shooting rioters and demonstrators? Were they really so stupid or so isolated from the political realities that they did not realise that images of dead bodies plastered all over the TV screens and the newspapers might have an adverse effect on public sentiment?

But, as always, the BPI are in the frame. That much I wrote earlier but, with even greater clarity, the idea of a high level failure stands up. This is where we should be looking to lay the blame. One wonders, therefore, precisely for what Mr Cameron was apologising ... the incompetence of the Army High Command, or the greater and more serious incompetence of the Heath government, which bears the ultimate responsibility.