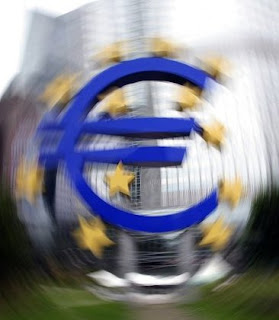 The single currency is in its death throes and may not survive in its current membership for a week, let alone the next five years. So say twelve out of 25 "leading economists" questioned by The Sunday Telegraph. Eight believed the euro would survive and the remaining five were undecided.

This sounds rather like the embodiment of the old joke: if all the economists in the world were laid end-to-end, they still wouldn't reach a conclusion. But how this information helps us understand the current predicament of the euro is less clear.

What is increasingly clear, though, is that debt is creating massive stresses on the banking system, with the ECB's Financial Stability Review pointing out that eurozone banks could face a credit crunch as they compete with governments for funds in coming years.

The prospect of banks and sovereign borrowers competing head-on for funding is not a happy one, with the concomitant risk of public debt crowding out bank borrowing.

But what is getting bizarre to the point of being surreal is the increasing difficulty in separating the two. In 2009, countries borrowed more than €800 billion, partly to bail out banks, which in turn then bought public debt that had been driven up by the bail-outs.

Carsten Brzeski, a senior economist for ING, thinks we should "really take this seriously." The process of banks buying public debt after being bailed out with state funds resembles the shady practice of using multiple bank accounts to cover "rotating overdrafts". This is a parallel "which holds very well in terms of the inner eurozone circle," he says.

Brzeski adds that "pushing it from one to another and back is kind of a multiplier effect", but notes that governments held underlying assets and their economies generated value that underpinned the process. "It only works if the underlying fundamentals are healthy," he cautions. "Otherwise it just goes up in smoke."

It takes no great expertise, however, to realise that the "underlying fundamentals" are very far from healthy, a point reinforced by the New York Times.

This paper tells us that, while foreign banks and other financial companies have lent $2.6 trillion to public and private institutions in Greece, Spain and Portugal, no one - not investors, not regulators, not even bankers themselves - knows exactly which banks are sitting on the biggest stockpiles of rotting loans within that pile.

With this in mind, the FSA has asked UK banks to model a number of disaster scenarios, including Greece defaulting on its loans. Analysts estimate that British banks have a total exposure of more than £100 billion to Greece, Portugal and Spain.

The situation gets even more murkier when, as Spiegel reports, the ECB has been buying up Greek bonds by the bucketload, even though Athens is already getting money from the rescue funds set up to bail it out. German central bankers, we are told, suspect a French plot behind the massive buy-up - giving French banks the perfect opportunity to get rid of their Greek assets.

Small wonder Václav Klaus was recently telling the Wall Street Journal that the eurozone has failed and Richard Woolnough, M&G Optimal Income Fund Manager, was in The Daily Telegraph asserting that "the possible demise of the euro is now very much up for debate."

The debate may well erupt this week as Belgium, Holland, Austria, Portugal, Spain and Italy collectively test market confidence this week when they try to borrow a total of €20 billion on the bond market. However, with Reuters suggesting that the euro will be down to $1.17 by the end of the month, it does not seem as if the single currency will be collapsing this week.

How much longer Greece will still be on board is another question.