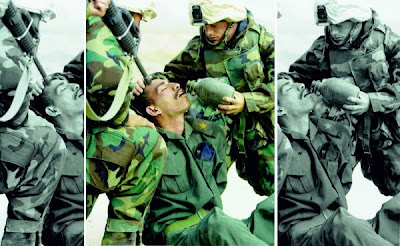 ... but photographers (and newspaper editors) do. The picture above is taken from a Russian site, which was commenting on the recent Reuters photo-cropping scandal. It shows how selective cropping of a picture can completely change the message delivered.

Interestingly, I picked this up through the statistics site because it linked to EU Ref. And I'm getting quite a few links on the Reuters story, but - with the occasional honourable exception - British blogs have gone AWOL. It was exactly the same in 2006 during the Qana affair, when this site attracted well over a million hits in the space of three days. British blogs were noticeable by their complete absence.

It is thus not only the British media which presents a distorted view and then exhibits a dismal parochialism that would put a village fête planning committee to shame. The British political blogosphere, at times, is as small-minded as it comes. Mostly, the "big hitters" are Westminster-centric, as are so many of their readers. That explains why they are so ill-informed, so dismally narrow in their perspectives and limited in their influence.

The blogosphere has never really taken off in this country as a political force – and part of the reason is that so much of the production is parochial crap which is more often than not aping the parochial crap in the MSM. But then, that's obviously what a lot of readers want, and if they get it, they can hardly complain. But it is still crap.