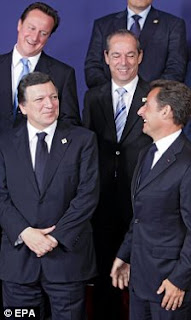 I shall let you into a little secret – after writing and thinking about it for more than 20 years, I am bored witless with the euro, and the vanity and stupidity of the "colleagues" in trying to keep the project going. I just want the bloody thing to collapse, as it was always going to, so that I can say "I told you so" and we can get on with clearing up the wreckage.

That said, Charles Moore writes in The Daily Telegraph about how the "inevitable failure" will be "horrendous for us all" - although those of us who, in the 1990s, predicted this denouement, he writes, "would not be human if we did not permit ourselves a quiet, smug little smile."

"Smug" could so easily be my middle name by now, although being right about anything these days doesn't pay the bills. In fact, unless you are a lawyer, or a smug, above-the-line bastard like Moore, it's an almost certain guarantee of penury. No-one likes smug, below-the-line bastards.

For us "savage and homicidal" is probably a better option – it doesn't make you any richer or better liked but, during the short time it takes for the establishment to decide whether to rub you out or adopt you (or ignore you, which is what it usually does), it can make you feel better.

Not quite in that category – although getting there – is the delicious and much under-rated Witterings from Witney. Why the self-regarding Iain Dale gets his hit rate, when there are writers on the blogosphere of this quality is one of those perpetual mysteries.

The answer is possibly that Iain's regular readers are as low grade as the writer – a match made in heaven, so to speak. It would be great if we bloggers could grade our readers and then exclude those who didn't come up to standard - a sort of bloggers' revenge, getting back at all those stupid readers who don't understand or appreciate what we are writing.

I quite warm to this idea. Perhaps it is a service Blogger could do for us, running special reader tests for anyone who wants to read a blog. We could have "pre-approved" and graded readers, with special "reader filters" so we could define who was allowed to read our golden words. We could send the bottom grade - and politicians - over to Guido where they naturally belong. Grade seven could go to Dale, six to ConHome and so on.

This has endless possibilities. Instead of fretting (or braqging) about the hit rate, we could preen ourselves by saying, "yes, I know we have fewer readers but they are better quality - only grade ones allowed here". And when the hit rate goes down, we can blame it on the shortage of high quality readers, just like the MSM.

Anyhow, talking of quality and being under-rated, there's Mary Ellen Synon who should be at the top of the rankings (although me saying so is probably a kiss of death).

She has a picture of The Boy at the European Council (which I've nicked), which has him to a tee. Those who remember the pics of Blair and Brown in Brussels (especially Blair) will recall them not looking anything like as much at ease. In this pic, The Boy looks as if he has come home, which in a sense he has. He is naturally one of the "colleagues" and he fits in so well.

Synon's analysis is pretty good as well, much better that that offered by Norman Tebbit, another grossly over-rated writer, who is largely living off his reputation – but much-loved by the Daleites and the rest of the claque, which tells you what you need to know about him.

But hey! When you've finished with my erstwhile co-editor and her update, if you want some real rubbish, go and look at Subrosa. I'm off to write another piece about Bloody Sunday, which is only for high-grade readers. I expect the hit rate to be seriously down by the time I next look.

Did I tell you I was bored witless, by the way? I must do something about the death wish though. And one can't even trust Tory MPs to do it properly these days. If only he'd asked for help ...