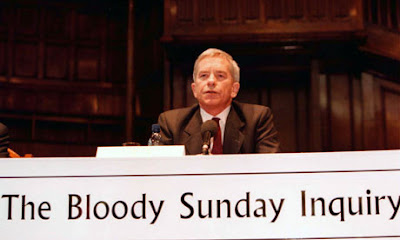 Move along there, nothing to see here, writes Richard Dannatt: "We must not dwell on the errors of the past". The fact that the Saville Inquiry has taken nearly 38 years to arrive at the truth means that its lessons are of limited use, Dannatt then asserts. "How we view things in 2010 is inevitably different from how we viewed them in 1972."

Well, that may be the case, although the assertion is highly debatable - even if there is a great deal of revisionism going on. But we are certainly not always doing things differently. British soldiers are still murdering people, with officers turning a blind eye, and Ministers still lie about events.

Furthermore, the Paras are still slaughtering civilians in the mistaken belief that they are being fired upon – although if only brown people in faraway places get killed it doesn't seem to matter so much.

But, most of all, the cover-ups still go on and, as Raedwald points out, there are still plenty of bent inquiry chairmen and whitewashers, obedient to the political class rather than to truth and to honour.

It is, thus, all very well Cameron apologising to the relatives and friends of the Bloody Sunday victims, but what about an apology to us, for being lumbered with a bill of £191 million to remedy the cover-up? What happened on Bloody Sunday, he says, "was both unjustified and unjustifiable." But what happened afterwards was also "unjustified and unjustifiable."

Equally "unjustified and unjustifiable" is the assertion by Gen Sir David Richards, current CGS – ranking alongside Dannatt's claims – his insistence that the Army had changed greatly over the 38 years since Bloody Sunday.

But it is just over 100 years since the Army failed so egregiously in the Boer War, following which Kipling published his poem, The Lesson. "Let us admit it fairly, as a business people should, we have had no end of a lesson: it will do us no end of good," he wrote.

Yet we are dealing with an Army which, 100 years later failed in Iraq and has since refused publicly to examine the lessons of that failure, only to repeat its mistakes in Afghanistan.

So, no Mr Dannatt, I don't think we should move on just yet. We should dwell on the errors of the past, long enough at least to learn the lessons from them, otherwise, as the Army seems so keen to do, we are doomed to repeat them, again and again and again.