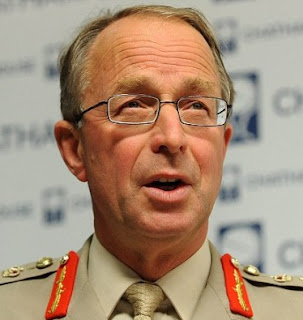 "The most important appointment of a generation", writes Con Coughlin on the appointment of a new CDS. And, given the portentous title of the piece, you might have thought that it would get better exposure than being tucked into the print edition after the editorial page.

But such is the competition for space that the more important news story gets poll position. And who are we to argue with such fine editorial judgement? One is simply amazed that Guido or Iain Dale didn't get there first, or that The Boy has not made a statement in the House about a development of such importance.

Back in the trivial world inhabited by the likes of Coughlin, he is saying that the new CDS will be "the most important appointment of a generation" – and he is not wrong, although the choice should be determined by the intentions.

In my view, if this current administration has any real intentions of winning through in Afghanistan (not that it has much chance of so doing), it might be better opting for Gen Richards, the recently appointed CGS. If it wants to manage defeat, then Houghton is probably the better man.

What emerges from Coughlin's piece, though, is what purports to be an insider view of The Boy's recent summit at Chequers, where his newly instituted National Security Council was convened to discuss the war in Afghanistan, the culmination of which was to adopt the Labour government's strategy.

We are told that deep gloom pervaded the proceedings as a succession of speakers explained how Britain was involved in a war that was not only increasingly unpopular with the public, but one that would ultimately end in failure. Even Cameron appeared to subscribe to the view that the sooner he ordered "our boys" to return home the better.

Coughlin, of course, was not there, so he is picking this up second or even third-hand – or maybe he has several sources. However informed, he feels able to tell us that what turned the meeting round was "some blunt speaking" on the part of the military professionals. Their argument was that while the war might be costly, both in terms of the blood and treasure, and present enormous challenges, there are encouraging signs that it is finally moving in the right direction.

This is from a man who himself must be one of the few journalists who still believes the war is still winnable and, thus fortified, he tells us that the alliance now "has a clearly formulated and effective strategy for ending the conflict and rebuilding the country after nearly three decades of strife."

But, where The Boy has earlier seemed equivocal on Afghanistan, Coughlin notes that he appears to have taken the "wise" military counsel to heart, throwing his full support behind Nato's (i.e., Gen McChrystal's) surge strategy, warning that the British public should brace itself for further casualties during this summer's offensive.

You have to do a double-take, though, to check you are not reading a copy of Private Eye when you read Coughlin earnestly telling us that, in its first weeks in office, the Cleggeron administration (he calls it "the government") has discovered first-hand "the importance of being able to draw upon well-informed and expert military advice".

Quite where that advice is coming from it difficult to determine, especially as Gen Richards (of whom Coughlin rather approves) was not present at the meeting. But, "to guarantee this advice remains of the highest calibre" writes Coughlin, it is crucial that Mr Cameron makes the right choice when he comes to appoint a successor to Jock Stirrup.

In principle, one would not disagree with that, and on that basis Coughlin definitely thinks the man in the hot seat should be Richards. The only problem he sees is that the current CGS has a reputation for speaking his mind, a virtue that might not be appreciated by the Cleggerons, who are "anxious to avoid controversy".

That opens the way for Houghton, says Coughlin, a man regarded as a smooth Whitehall operator – a "civil servant in uniform". But, since Britain is entering a crucial stage in this nation's proud military history, one that will demand strong, effective and professional leadership, Coughlin personally hopes that Cameron has "the political courage and good sense" to appoint Richards as the next CDS.

What no one has ascertained so far, though, is whether Richards actually wants the job. Depending on one's view of the future, in the short-to-medium term, the best career option for Richards might be to put as much distance as he can between himself and a widely expected disaster. And, putting it that way, one might argue that anyone mad enough to want to become CDS is clearly totally unsuitable for the post.