Not his finest hour 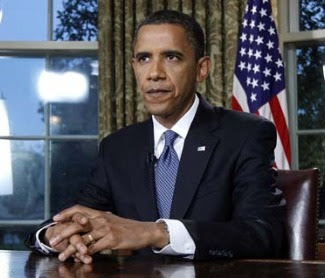 Neither Your Freedom and Ours nor Autonomous Mind seem terribly impressed by the speech Obama delivered last night.

Jonathan Adler over at The Corner was glad he missed it. He went to the movies to see something more realistic and believable. This is a president, he says, who likes to assert his authority but remains unwilling to accept responsibility.

The full text of the speech is here. The "one approach I will not accept is inaction," the man says, then talking of "our determination to fight for the America we want for our children ... even if we're unsure exactly what that looks like."

"Even if we don't yet know precisely how we're going to get there," he concludes, "We know we'll get there." His critics might just have a point here! Even HuffPuff was disappointed: "And yet, basically what we got, in spades, was sentiment. To be sure, it was no doubt deeply felt ... ".

The idiot is definitely losing it.