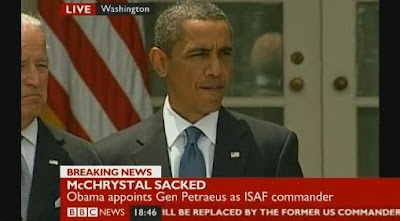 In what must rate of a stroke of political genius, Obama has seen off the challenge by the US military over Afghanistan and, by firing McChrystal and appointing his boss Gen David Petraeus, has dumped the problem back in their laps and told them to get on with it.

On the basis that there is nothing new under the sun, there must be a precedent for a field commander being fired and his boss being appointed to replace him, but such incidents are few and far between. However, few can have expected that Obama would take this option and, in the brief period while McChrystal's fate was in the balance, you did not see Petraeus's name in the ring.

What we have been seeing is a huge amount of thrashing about, as commentators struggle and largely fail to make sense of recent events, not realising that this was most likely a deliberate ploy by McChrystal to destabilise Obama and dump the blame for a failing campaign in the lap of the president.

As such, it is most unlikely that McChrystal's quite deliberate and studied coup de main was done without the knowledge and acquiescence (if not approval) of his boss.

By appointing Petraeus to take over from his uppity subordinate – effectively a demotion – Obama demonstrates the skills acquired and honed as a street-fighting Chicago politician. He has reasserted control over – as The Guardian puts it – a politicised military, with the generals out of control.

In so doing, he dumps responsibility for success in Afghanistan in the lap of the supposed architect of the campaign, leaving McChrystal isolated and irrelevant. The Army is still very much in the frame and Obama's message about "civilian control" could not have been clearer.

Hero of the Iraqi "surge" and a Bush appointee, Petraeus must now deliver the goods in Afghanistan or go under. His appointment, to a very great extent, insulates the president from the fray. The new chief is in the hot seat, and with him the military. The game has just changed, and taken on a whole new dimension.