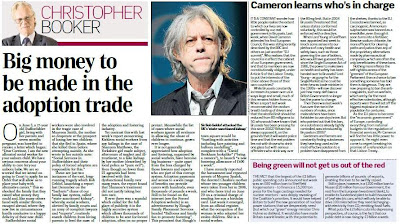 An interesting and unusual Booker column today, in three parts as usual. The lead story, about forced adoption is not our bag but, as another story in the paper attests, something has gone very wrong with the system.

In the second part of his column, Booker takes on board the experience of The Boy at his first European Council, and ventures on a few reasons as to why he might come to regret breaking his promise of a referendum on the Lisbon Treaty.

Then, for the final story, we get observations about the cuts announced last week. These were deeply revealing of the Cleggerons' priorities as the most significant cut in the £2 billion public spending programme was an £80 million loan to Sheffield Forgemasters – to finance a 15,000-ton press for the huge castings needed for nuclear reactors.

This would have helped Britain to build the new generation of nuclear power stations that we desperately need, but which our lover boy Chris Huhne so dislikes. I t would also have made Britain a world leader, with the potential to generate billions of pounds of exports, enabling the loan to be swiftly repaid.

But with Huhne at the helm, this was not to be. Still in place, however, is a £200 million loan to Nissan (£20 million from our administration, the rest from the European Investment Bank), to enable its Sunderland plant to build thousands of Leaf electric cars, which will only be able to drive 100 miles before they need recharging – with electricity from CO2-emitting fossil fuels.

What puts the £2 billion cuts into depressing perspective, of course, is the fact that our public debt is now rising by £3 billion a week. I suspect that, by the time Osborne gets to grips with this (if at all), many a Leaf will have fallen – and it won't even be autumn.