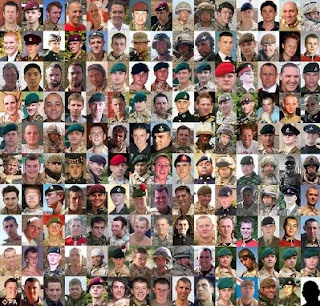 I was wrong about the blogs to some extent. Craig Murray already has a piece up on the 300 deaths, noting: "We immediately have David Cameron and Liam Fox spewing out the standard propaganda about the occupation of Afghanistan making the world a safer place. This is quite simply a ludicrous proposition, and one to which the security, military and diplomatic establishments do not subscribe."

The BBC refers to this as a "tragic milestone" but what is quite stunning in this intensely political event (and it is a political rather than a military milestone) is the response of Shallow Dave. He is saying that Britain must "keep asking why" its troops are in Afghanistan. That is according to a report in The Times, with the Cleggeron leader leading the tributes to the "sacrifice" made by the 300 British service personnel who have died since operations in Afghanistan began in October 2001.

Says Dave: "It is desperately sad news: another family with such grief and pain and loss. Of course the 300th death is no more or less tragic than the 299 that came before. But it is a moment, I think, for the whole country to reflect on the incredible service and sacrifice and dedication that our Armed Services give on our behalf."

Then Dave tells us: "We are paying a high price for keeping our country safe, for making our world a safer place, and we should keep asking why we are there and how long we must be there."

To that, the man adds: "The truth is that we are there because the Afghans are not yet ready to keep their own country safe and to keep terrorists and terrorist training camps out of their country. That's why we have to be there. But as soon as they are able to take care and take security for their own country, that is when we can leave." 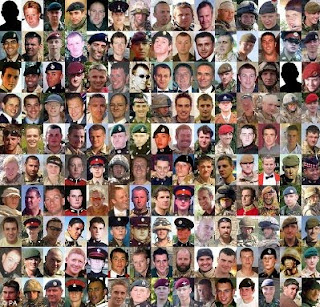 So the clichés are trotted out, carefully honed and polished, kept nicely chilled ready to trot out for such occasions, as meaningless now as they day they were crafted by the 16th PR Battalion of the 31st Right Wing Corps of Spinners – now officially special advisors to the Cleggerons, complete with official salaries and luncheon vouchers.

What is so offensive about all this, of course – apart from the total artificiality of the occasion - is that we have a politician telling us to ask a question: "why are our troops in Afghanistan?" Shallow hasn't quite got the hang of this politics business. We ask the questions, he gives us the answers – except, of course, he doesn't.

Even Con Coughlin thinks "it's not really good enough" for Cameron to say this. "One of the biggest disadvantages that has affected this campaign," he writes, "is the failure of our governing classes to provide clear and effective leadership, and to explain precisely why we have upwards of 10,000 British troops locked in mortal combat with the Taleban."

And, as always, in our desperately cynical age, whenever a politician starts using the word "truth", one learns to check the family silver and the contents of our wallets, certain in the knowledge that the man (or even woman) is up to no good.

The "truth" on this occasion is almost certainly nowhere near what Shallow Dave claims it to be. "We" – i.e., nearly 10,000 very expensive military personnel, several hundred officials and an unknown number of highly-paid contractors – are there because Dave hasn't yet worked out a mechanism for getting them out, and it is probably too early for him to try.

So, for the time being, young men – and the occasional woman – must be slaughtered, to absolutely no effect, to achieve nothing, a process which must continue until such time as it becomes politically convenient for the British contingent to depart. Then it will be up sticks, "job well done, chaps" and the charade of turning defeat into victory starts all over again.

With that the case, though, the very least the political classes could do is to avoid insulting our (collective) intelligence. We really do not need Liam Fox telling us that: "Our armed forces are the best in the world." Even if they were, which is doubtful, what does that mean? Best at what?

He tells us they are "operating daily in the most dangerous and demanding conditions". You don't say! "Some have made the ultimate sacrifice to ensure this essential mission succeeds," he says. Nah. Very few who look upon the prospect of their own deaths regard it as a "sacrifice" – human motivations are much more complex than that.

But then we get the money quote: "My thoughts and those of the nation's are with the families and friends of all those servicemen and women who have fallen but our resolve and determination to see the mission through remains steadfast."

No they are not. The thoughts of the nation are largely with the World Cup, with Wimbledon and with making a living – and keeping the shysters from the government and the other nobs off your back.

But it is always remarkable to hear from the politicians and generals, well clear of the front line and the dangers attendant therein, how our "resolve and determination" must remain "steadfast." So, from the rear, as they pocket their generous salaries and expenses, they say: "stand fast". That is so easy when you are not personally at risk.

Meanwhile, three Australian soldiers and one American service member were killed today in a helicopter crash in southern Afghanistan. Including the crash, at least 57 international troops, including 35 Americans, have died so far this month, a rate that could make June among the deadliest for US and other international forces in the nearly nine-year war. So far, the deadliest for the international force was July 2009 when 75 troops, including 44 Americans, were killed.

But hey! As long as the rest remain "steadfast" and act with "resolve and determination" - until the politicians pull the plug that is - everything in the garden is rosy. But one can't help but feel that if these young men and women are to spread their brains over the Afghan terrain, they deserve something better than second-hand clichés.