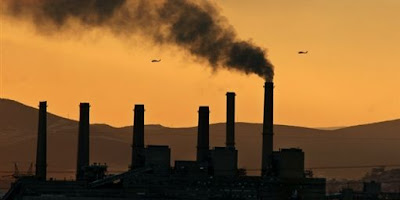 How to get rich was our subject for discussion last December as we reported how the CFC scam, mainly in China and India, was making entrepreneurs obscenely rich out of selling carbon credits through the UN's Clean Development Mechanism (CDM).

Now, six months later, Le Monde has picked up exactly the same story (translation here), complaining that CFCs have become the main source of the CDM.

Half a billion tonnes of CO2 (equivalent) "saved" through the CDM between 2004-2012 have come from the destruction of HCF 23. As we pointed out in our piece, this is the by-product of HCF 22 production but so lucrative has the CDM business become that the by-product has become the product.

We now have the perverse consequences, says Le Monde, that because the price paid for the destruction of gas is up to 70 times the actual cost of production, it is being produced solely in order to generate carbon credits.

Manufacturers have increased their production, artificially and deliberately maintaining high levels of HCF 23 production which would not exist if there was no financial incentive from carbon credit sales. Furthermore, it is estimated that these abuses have allowed the industry to collect one billion dollars annually.

Only the greenies could invent such a stupid, malign system – a cash-making machine creating money out of nothing, all in the interests of "saving the planet". And then they keep schtum about it as money pours into the coffers of carbon traders and opportunists. Where is Moonbat when you really need him?