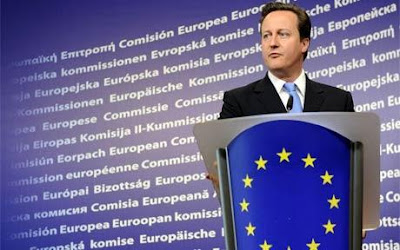 There is a sort of bovine, lumpen stupidity in the media's insistence at labelling today's meeting of the European Council a "summit".

It is not that most journalists are thick – even if many are – or that their editors have the intellectual quotients of gnats (some are actually quite bright), but that they simply do not have an intellectual frame of reference by which they can understand the phenomenon of a supranational government and the nature of its diverse structures.

However, their evident incapacity makes their "sagacious" comment quite irrelevant. Without the intellectual equipment, the basic knowledge, they have no means of understanding what they are seeing and they, therefore, simply do not know what they are talking about. All they can do is extrude meaningless drivel. Much of it sounds very convincing, but it is nevertheless drivel.

Unfortunately, the bovine stupidity that we see in the media also extends to politicians – and especially The Boy - seen above in his natural surroundings. He typifies a certain type of Tory toff who is wholly incapacitated from learning, suffering as he does the singular handicap of believing that he actually does know what he is talking about.

For that affliction, there is no known cure, which is why Tory politicians are so routinely taken apart in "Europe" as the "colleagues" run rings round them. But, as long as we have a media which not only shares the ignorance but revels in it, there is little chance of them being revealed for what they really are.

Whatever else happens, the charade must go on, noted only by the likes of Mary Ellen Synon, a rare diamond who observes, with great accuracy, that Cameron lacks the equipment to do the business.