A quote too far? 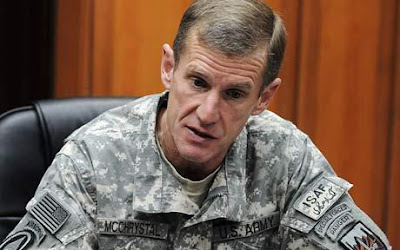 In the closing stages of the film, A Bridge Too Far, we saw Generals Urqhart and Browning starting to distance themselves from what was then evident as a military disaster, with Browning uttering the immortal words: "I always felt we tried to go a bridge too far."

There seems to me to be something of this with Gen Stanley McChrystal and his interview with Rolling Stone magazine. With the man admitting that everything said was on the record, and the magazine checking back with the General's aides before using the quotes, we have on the face of it an example of a senior soldier committing professional suicide.

On the other hand, we could be seeing something more subtle – devious even, on the lines of the "bridge too far" excuse. It is very much an open secret that McChrystal's "surge" is going belly-up and, in the fullness of time, is going to fail. As did the British military in Iraq, the US military are going to need an alibi and a "scapegoat" – they need to dump the blame on the politicians.

McChrystal has put Obama in an impossible position. With the president's popularity evaporating, if he fires McChrystal – still a popular General – he takes the blame for when the campaign finally falls apart. If he doesn't fire our Stan, in effect he is endorsing (or not denying) the "contemptuous" comments about the National Security Team, which can then be held responsible for the disasters to come. Obama still gets it.

Basically, it's a win-win for the military, and a sign that the military has lost faith in its own ability to prevail in Afghanistan. The end is nigh and McChrystal may be signalling that all that matters now is who takes the blame.

And, from our own domestic perspective, how utterly bizarre it is that Cameron has bought into the campaign just as everyone else is planning on bailing out. Call it gut instinct, if you like, but something tells me that the Afghan campaign is going to be very significant politically. It has the potential seriously to damage the current administration.