A political own goal 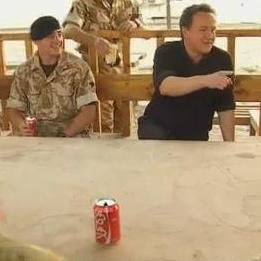 An unannounced visit by the Cleggeron leader to Afghanistan yesterday - intended to underline the improving security situation in the country - has partially backfired. "Call me Dave" was forced to cancel a visit to the Army's Shazhad forward operating base in Helmand.

This, we are told, followed two successive mobile phone intercepts, the first referring to a possible rocket attack on a helicopter and the second, intercepted close to the base, which suggested that a VIP was flying in.

A decision was thus taken by military commanders to call off the visit. The base is in an area which was previously an insurgent stronghold and which was heavily contested in the recent Operation Moshtarak offensive in central Helmand.

Dave's Chinook was diverted to Lashkar Gah where he met some British troops for a photo-opportunity and was forced to eat a hamburger with ketchup. He was said to be disappointed that the diversion gave the impression that the security situation was not good when to all intents and purposes the opposite was the case.

So there we are ... three helicopters – to our knowledge – have been lost to RPGs – two within one month. Others, including two RAF Chinooks, have been downed by Taliban gunfire. But hey! This gives a false impression about the security situation. Why it is though we are fed such drivel and why it is that The Boy feels the need to offer himself as hostage to fortune, Heaven only knows.

Despite his fond wish that the progress can be speeded up, this is unlikely to happen. Even US Gen McChrystal is admitting that operations were not going as planned and winning support from local leaders was proving "tougher than expected". In Marja, where the US Marines have claimed early success, residents see signs that the insurgents "have regained momentum" in recent weeks.

Where the US forces, with their vastly superior resources and larger reserves of manpower are having such problems, a BBC "expert" put the task facing Cameron as: "How do you withdraw in good order without giving the impression of defeat?" But, as it stands, Dave seems determined to set himself up for a fall. Building expectations of "progress" which the armed forces cannot deliver, he is confronted with not just with the impression but the actuality of defeat.

When that happens, it will be something of a political own goal. He could have distanced himself from the failures associated with the previous administration but has accepted responsibility for achieving success in a war he did not start, does not understand and is not temperamentally equipped to resolve. "This is not a war of choice. This is a war of necessity," he says. "This is not a war of occupation. This is a war of obligation."

Despite a second-rate defence team, a dysfunctional military, a fragile political base and empty coffers, Cameron has still fallen into the trap of casting himself as a (reluctant) war leader. This lack of acumen could well be his undoing, the failure which defines his short tenure as prime minister.