Where is the evidence? 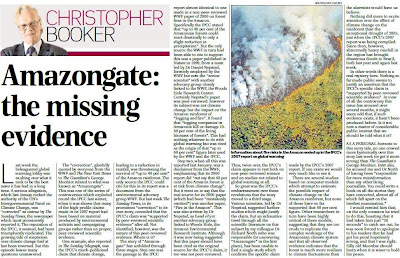 Booker has taken on board the "Amazongate" developments in this week's column. Interestingly, rather than me, it was Booker who suggested "going big" on the issue this week, his motivation in part being the intervention by George Monbiot, who has been his usual charmless self, parading the ugly face of warmism in all its triumphant ghastliness.

Monbiot, however, is but one of the warmist community who has leapt upon the strange action by The Sunday Times in disowning its own report and wrongly conceeding that there is peer-reviewed science that supports the IPCC claim on the Amazon in the fourth assessment report. Headed by the WWF, which is crowing that Amazongate has "evaporated", the group triumphalism served to emphasise the importance of the issues involved.

Returning to Monbiot, if he is bad (and he is), his warmist commentators are truly awful. They are aggressive and display a sneering attitude and an absolute determination to ignore any argument but their own or to concede any points of substance. Thus, despite the clear evidence, and the absence of evidence, the warmists will allow only a "referencing error" in the WWF report used by the IPCC, as the whole basis of "Amazongate".

Having entertained myself briefly on the Monbiot comment section (username: "spacedout") one finds a predictable pathway where patient exposition is ignored, distorted and mocked, the discourse eventually descending to the ad hominem with nothing whatsoever resolved. It is not possible to engage in a rational discussion with the warmist fraternity and I have withdrawn, simply because it is a complete waste of time. It is worse than that, in fact. One feels soiled by the experience.

With the aggressiveness displayed by the warmists, it would take little imagination to work out that The Sunday Telegraph would be more than a little nervous about entertaining the Booker theme. This is an issue where those who feel slighted are keen litigants, and where they have frequent recourse to the PCC – which has a recent history of favouring the warmists.

Thus, as one might also imagine, the newspaper would be cautious about imputing motives to those who are so keen to challenge "Amazongate", or allowing speculation as to the reasons why they are putting quite so much energy into damage control.

However, the reason for the sharp reaction is also not hard to work out. As we have previously indicated, this is about money. Saving the forests, and in particular the Amazon, is how climate change concern is "monetized", with potentially billions of dollars to be made from generating carbon credits from the rainforests.

This is one of the other things the Monbiot commentators do not seem to be able to deal with – the fact that the key players in the drama, the WWF and Daniel Nepstad of the Woods Hole Research Center, are far from disinterested players. They have strong connections and massive financial interests in talking up climatic Armageddon in the Amazon basin.

But what is disturbing is the narrowness of the arguments offered by the IPCC, which demonstrates how this aspect of climate science has fallen into the grip of a limited, self-interested clique of advocates (dominated by WWF). A broader view of the science - ignored by the IPCC - completely refutes the Armageddon scenario posited by Nepstad and his allies.

With such huge sums of money involved, though, it is unsurprising that the clique are devoting so much energy to trying to ensure that their view prevails. Booker today has recognised the importance of this attempt, and is standing firm. The clique now have a problem. Having bullied The Sunday Times into submission, they have to try the same with The Sunday Telegraph, or duck the challenge and pretend that their writ still holds.

Already, with Monbiot's intemperate views on record, they have made a series of tactical errors. If they now try it on again, they will find sterner stuff than the patsy Sunday Times. Whatever the WWF might say, and however much Monbiot might crow, Amazongate is alive and kicking. It most certainly has not "evaporated".

UPDATE: Willis Eschenbach writes a guest post in Watts up with that? Newsweek has a little crow.