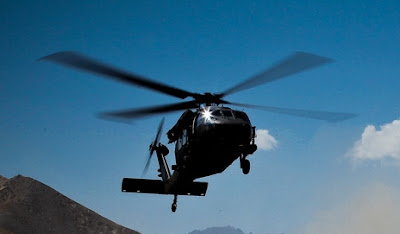 NATO says a helicopter has been shot down in the Sangin district. Four troops have been killed. The Taliban claims responsibility.

The Times is reporting that the aircraft was a US Blackhawk, attempting to pick up a British casualty. It came under fire around midday over Forward Operating Base Jackson, near the British-held town of Sangin.

With others, the BBC is reporting that the aircraft was brought down with an RPG and that it crashed in the Sangin district bazaar.

This seems almost an exact re-run of the Mi-26 downing in Sangin last July. It too was brought down by an RPG as it was approaching FOB Jackson - in apparently much the same area.

The current incident follows the recent downing of a Sea King as it came in to land at a checkpoint in Nad-e Ali, also struck by an RPG. The hit was described at the time as a freak "lucky shot." Five soldiers were injured.

However, since the soldiers in this incident are American and it was a US helicopter that was lost - albeit in a British area of operation, coming to the aid of the British - the notoriously parochial British media is barely reporting it.

It would have been a different matter entirely if a British helicopter had been shot down, and four Brits killed - but there you go. Who are we to question the news values of the British media?