What are we doing there? 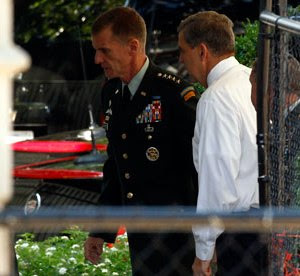 A Royal Marine from 40 Commando died today during a fire-fight in Afghanistan - the fourth to be reported killed in four days, bringing the total to 303.

This death comes against the background of the Rolling Stone article, with Gen McChrystal in Washington (pictured) and his fate in the balance.

Reading the article, one finds that McChrystal, like other advocates of COIN, readily acknowledges that counterinsurgency campaigns are inherently messy, expensive and easy to lose. "Even Afghans are confused by Afghanistan," he says.

But even if he somehow manages to succeed, after years of bloody fighting with Afghan kids who pose no threat to the US homeland, the war will do little to shut down al Qaeda, which has shifted its operations to Pakistan.

Dispatching 150,000 troops to build new schools, roads, mosques and water-treatment facilities around Kandahar is like trying to stop the drug war in Mexico by occupying Arkansas and building Baptist churches in Little Rock. "It's all very cynical, politically," says Marc Sageman, a former CIA case officer who has extensive experience in the region. "Afghanistan is not in our vital interest – there's nothing for us there."

"Throwing money at the problem exacerbates the problem," says Andrew Wilder, an expert at Tufts University who has studied the effect of aid in southern Afghanistan.

"A tsunami of cash fuels corruption, delegitimizes the government and creates an environment where we're picking winners and losers" – a process that fuels resentment and hostility among the civilian population. So far, counterinsurgency has succeeded only in creating a never-ending demand for the primary product supplied by the military: perpetual war.

And the reason we are wasting blood and treasure on this failed enterprise is?