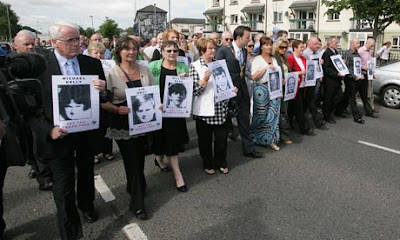 I really did have no plans to do another piece about Bloody Sunday, wanting to move on to other subjects - which I'll now have to do later. But what pulls me back into the fray is an admission to being perplexed, although perhaps one should not be ... was it going to be any different?

Here, I refer to a significant social phenomenon, where we see the Saville Report embraced by the left wing media, and almost totally ignored by the right. That transcends the subject material and makes for an unresolved issue of wide and continuing importance.

It is that which has got me worked up, because I fully expected a rash of stories in the Sundays, for what by any measure was a big and important event – a £191 million report from a 12-year inquiry on an incident which contributed significantly to the length and intensity of a conflict on UK soil which lasted nearly 40 years.

With 5,000 pages in 10 separate volumes, would someone like to tell me that this is not important, that it should not get an airing in the Sundays - all of them? Yet, while we see stories in The Independent on Sunday and others in The Observer, there is nothing of note in The Sunday Times or The Sunday Telegraph or anything by way of useful analysis in The Mail on Sunday.

One can see the direction from which the left wing papers are coming. They have always tended to be "anti-army", or at least non-militaristic, and have been supportive – or more so – of the Irish campaign groups. If not absolutely true, those are certainly the perceptions, while the Right is pro-military, "patriotic" and broadly Unionist in sympathies.

In partisan terms, therefore, one can see the Left being more enthusiastic about Saville, and that is proving to be the case. But the inability of the Right to see the point of the inquiry, and break out of its narrow partisan boundaries is short-sighted and self-defeating.

What should concern the Right are two things: military effectiveness and the proper workings of the judicial system. And in both these areas, there are lessons to be learnt from Bloody Sunday for, on the one hand, it was a military "cock-up" and, on the other, a failure of the justice system.

Hey! That's a good question – and very pertinent. The concluding paragraph of Saville's overall assessment was:

The firing by soldiers of 1 Para on Bloody Sunday caused the deaths of 13 people and injury to a similar number, none of whom was posing a threat of causing death or serious injury. What happened on Bloody Sunday strengthened the Provisional IRA, increased nationalist resentment and hostility towards the Army, and exacerbated the violent conflict of the years that followed. Bloody Sunday was a tragedy for the bereaved and the wounded, and a catastrophe for the people of Northern Ireland.

Yet it wasn't just the events of Bloody Sunday that did this. It was the fact that the British establishment closed ranks – that Lord Widgery and his team during the first Bloody Sunday inquiry in April 1972 compounded the felony and inflamed bitterness for generations to come.

In a Channel 4 television programme entitled Secret History: Bloody Sunday broadcast in 1992, Bishop Daly said: "What really made Bloody Sunday so obscene was the fact that people afterwards, at the highest level of British justice, justified it."

This failure also needs to be acknowledged, says Mansfield. No system of justice is worthy of its professed principles if, as soon as it is under pressure, its independence and judgement evaporates. And, he says, the system of justice must never again allow itself to be subverted.

Then, also in the IOS is a piece headed: "How the killing of an innocent man may have paved the way for Bloody Sunday".

The man was William McGreanery, shot dead by a British soldier on the streets of Londonderry 15 September 1971, with subsequent allegations that he was carrying a weapon, that he was attempting to fire on the security services and even that he was a member of a paramilitary group.

But McGreanery, who was 41 when he died, has finally been exonerated by an official report which shows that he was an innocent, cut down in what police viewed as cold-blooded murder. However, at the time, the government's response sent a signal to soldiers that they "would be protected as far as the prosecution authorities were concerned."

This meant that the British Army was effectively "being told they would be immune from prosecution, and whatever they did they could do with impunity", thus helped to pave the way for the Bogside assault on 30 January 1972 – in effect, giving the green light to soldiers to act with impunity.

This story is expanded upon in The Observer. It tells us that more than 150 killings committed by soldiers during the Troubles were never fully investigated because of "an informal understanding" between the police and the army, under which soldiers who shot civilians were questioned by the Royal Military Police (RMP) rather than police detectives.

This has been highlighted by a Derry-based human rights organisation, the Pat Finucane Centre, and meant, according to the centre's Paul O'Connor, that between 1970 and 1973 soldiers were unlikely to be held responsible for the consequences of their actions. During that period they shot dead more than 150 people in the province.

An agreement was made in 1970 between the chief constable of the Royal Ulster Constabulary and the army in Northern Ireland and was not revoked until September 1973 after being found "unsatisfactory". So lax were RMP investigations into killings that they were known as "tea and sandwich inquiries." This failure encouraged a culture of impunity to develop among troops who felt they were above the law, says Paul O'Connor.

So, yet another piece of the jigsaw locks into place, to which is added in the IOS article news of a "unique insight into the mindset of soldiers" on the eve of Bloody Sunday.

This is revealed in an unpublished extract of a book by an officer who served that day. The identity of the author has never been established, but his account was submitted from the Parachute Regiment to the MoD for clearance in the 1970s, only to emerge as new evidence at the Saville inquiry.

It recalls the frustration of dealing with protesters at a march at Dungannon the day before Bloody Sunday: "It was almost as though we were willing them to come out fighting, and bring the whole business down to a level which we could at last understand and appreciate – violence." And the officer tells how morale was high on 30 January:

... after briefing on the promised confrontation – which they were all looking forward to" and "the expectations of 'preparation for battle' kept out the chill of the bright winter morning we had woken up to... This time the 'enemy' had promised us the biggest and best civil rights march... And we would be ready for them – indeed, this was an opportunity we had been waiting for. We, at last, had plans of our own.

The author cites fears that the "plan" was "fraught with danger" of becoming a "GMFU" (grand military fuck-up), and recalls how one officer's wife, on being told of the plans, remarked: "I can just see the headlines – Londonderry's Sharpville."

Also in the same paper is another account - which shows you how seriously the IOS takes the issue. It is a long piece, but the most salient comments comes towards the end, where it describes how the CSM of the 1 Para Support Company - whose men did the killing - broke ranks.

He said he never saw any gunmen, weapons or bombers: "I feel in my own heart a lot of these people were innocent. It was badly handled by everybody." In effect, some of the Paras "lost it". That is what happened on Bloody Sunday.

That now brings us to The Observer which asks: "Were Bloody Sunday soldiers involved in 'Ballymurphy massacre'?" This puts us in the same territory as in my earlier piece with the news that relatives of 11 people killed in Belfast by the army in 1971 are now calling for an inquiry into their deaths

So, what have we got here? On the face of it, we have an Army out of control, imbued with the idea that it is above the law and can kill without penalty, we have that Army actively seeking confrontation in circumstances where civilian deaths could have been foreseen. Then, according to this commentator (or here if that link does not work), the cover-up by the Widgery tribunal amounted to, in effect, retrospective sanctioning by the British government of a massacre.

That thesis is explored here and here and is one of many sober analyses which challenge the perception (and claims) that the Army's counterinsurgency operation in Northern Ireland was in any way a success.

But, to this day, the Army avers that its "great skills" at counter-insurgency were developed and honed in Northern Ireland, a false prospectus which surely cannot be allowed to stand (especially as the Army seems to have difficulties in recalling the lessons it learned). Did it - as some allege - murder and blunder its way through the campaign, just as it seems to have done with all its other poster-child campaigns such as Malaya, Kenya and Cyprus, or can what it says (in whole or part) be taken at face value?

Further, the perception that troops are immune from or above the law seems to survive in other operations, such as the occupation of southern Iraq, and the culture of violence to civilians and cover-up seems to continue to this day. Goodness knows what will emerge from Afghanistan.

These issues, it would seem to me, are not or should not be solely left wing concerns, but should be of interest to the political right. That they seem not to be is the unanswered mystery of this affair. What is going on? Why, even after the elapse of nearly 40 years, is the establishment so keen to bury the lessons (and the debate) instead of learning from them?