Our mission is doomed 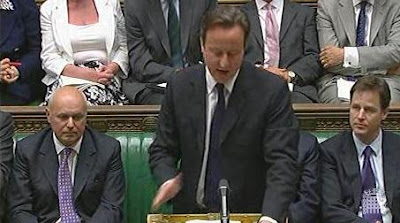 So, "Call me Dave" made a statement to the Commons yesterday, his first since his trip to Afghanistan as Cleggeron leader, supposedly spelling out his administration's approach to the ongoing conflict.

Heavily trailed as paving the way for a change in strategy, it followed extensive talks with Karzai at Chequers and meetings with US defence secretary Robert Gates and Gen David Petraeus in Downing Street – all on the back of a delegation of three Cabinet ministers being sent to Afghanistan to see the situation on the ground for themselves.

But, if there were expectations of a change in strategy, they were not fulfilled. One even wonders why The Boy actually bothered with a statement. He offered nothing new, nothing different. All he really wanted to do was emphasise why, in his view, our troops were in Afghanistan. It was all about national security. Afghanistan was not strong enough to look after its own security and without our presence it could emerge again as an al Qaida base.

What had changed then, one might ask, to which The Boy provided the answer: we needed to be clear on national security perspective.

Our route home was to put security first. We were six months in to the surge and had to give it time to take effect. We would not stay a day longer than necessary – the key was in training the Afghan security forces so that we could transfer the security responsibility, but based on facts on the ground not pre-determined timetable. Then we could come home, job done, heads held high.

And that was it. In a sparsely attended chamber there was no hint of the huge controversy which has been raging over the weekend, with the likes of Matthew Parris asserting that Cameron and Clegg "must know our mission is doomed", up against the controversial General Dannatt who believes the war can be won.

Of these two, soldier Dannatt is ostensibly better qualified - but Parris has the advantage of consistency. He has always been against the Afghan adventure, right from 2006, when he decided that the mission could not work with 3,000 or even with 30,000 men, in June 2008, when he declared we couldn't win and now, when he thinks we are simply sacrificing soldiers to keep the US on-side.

Parris is too sincere and his case too well argued for it to be dismissed as cynical, while Dannatt is too stupid for his case to be considered at all. He trots out the bog standard "exit strategy" meme, arguing that the Afghans must run their own security and "the Afghan economy must be converted as quickly as possible from one based on the illegal opium trade, to one profiting from traditional cash crops, such as wheat, saffron and pomegranates."

If pigs could fly and politicians could think coherently, the world would be a very different place, but either is about as likely as Dannatt's nostrums for Afghanistan. And then you realise that the General is offering exactly the same prospectus as "Call me Dave". The mission is indeed doomed.