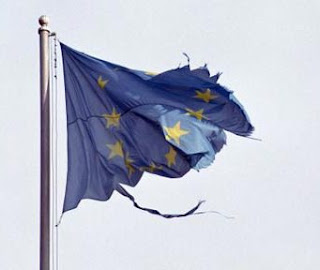 One of the reasons why we do not yet have an all-out currency crisis (yet) is – or so it would seem – for the rather banal reason that traders are not yet quite sure what to panic about.

For sure, the euro sank again today, reaching a fresh four-year low, well under $1.19 against the dollar in early trading, egged on by Kermit leader François Fillon who saw only "good news" in euro-dollar parity. But the targeted destruction of debt-ridden economies is not proceeding apace. Instead, it seems, traders are mulling over the eurozone's prospects and the structure of the single currency, wondering what the hell to make of it all.

"I really don't know what the outcome of all this is," said Simon Derrick, a senior currencies analyst at The Bank of New York Mellon in London. "I genuinely can't see how any member of the currency union would leave -that would be like trying to unscramble an omelette. But I can't see how Germany would agree to greater fiscal union," he said, adding that for as long as these basic tensions persist, the euro is likely to keep falling.

Many analysts now believe that division amongst eurozone members about how to rescue the currency are too deep for agreement to be reached so, rather than move attention from one debtor country to the next, investors are casting a critical eye over the whole system before making their plays.

The clue as to this happening, we are told, is the movements in the eurozone bond markets over recent weeks. As nerves over the euro have intensified lately, bonds from countries that have previously proven to be immune to these stresses - notably from France, Austria, and Belgium - have all been hit.

What we have been seeing, says Steven Barrow, a currencies analyst at Standard Bank in London, was "the market pressurized the whole of the eurozone."

This, he says, "raises the rather daunting thought that rather than the crisis moving on from Greece to one other country, like Portugal, in a domino-like fashion, the market might just apply pressure to the whole euro zone bond and credit-default-swap market, looking to flatten all the dominoes at once."

There's now a "pretty good chance" of a "precipitous" decline in the euro from current levels, Barrow adds. And since key politicians appear relaxed about this possibility, and some have even welcomed it, official intervention to push it back up extremely unlikely.

Of course, the relaxed stance is predicated on the euro reaching parity with the dollar, but there is no immutable law which says that, having got to that level, the euro will bottom out there. And if it keeps going, what then?