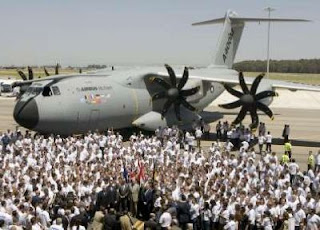 It may be a deceptively simple question, but why do we have to find about this from the official Chinese news agency?

From this source, we learn that The EU "defence ministers" met in Gothenburg yesterday, and agreed "that better cooperation between civilian and military actors would contribute to improved maritime surveillance and more effective peace support operations."

We also learn that ministers have agreed "to cooperate in training, risk assessment, intelligence, information sharing, evacuation, logistic support and strategic transport." The formal blueprint will be discussed again in November.

This is, apparently, a "two day informal meeting" and the ministers will continue to discuss "usability and flexibility of the battle group and the Afghan issue".

Elsewhere, we read that Spain is "very optimistic" that a deal will be reached to rescue Europe's largest defence project, the delayed Airbus A-400M military transport aircraft. This came from Spanish defence minister Carme Chacon on Monday, with a Reuters dateline from er ... Gothenburg. So a deal has been made, has it?

Meanwhile, back in the lil ol' UK, we are in the early stages of embarking on the process of a strategic defence review, and one would have thought that issues such as the "usability and flexibility of the battle group" – to which the UK is committed, might have a bearing on the discussions.

But, once again, we have hole-in-the-corner discussions, unreported by the UK media, which almost certainly will have significant effects on our future defence policy – to say nothing of our strategic airlift capabilities. And yet, we are told nothing.