The pictures tell the story 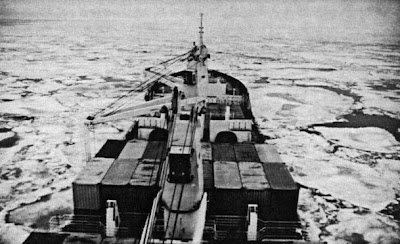 We were not going to return immediately to the "Northeast passage" but the temptation proved too great when we found the photograph shown above. It depicts an SA-15 type multipurpose icebreaking cargo ship of the Norilsk class. Nineteen were built for the Soviet Union between 1982-1987 at Finnish shipyards Wärtsilä and Valmet.

The significance of the picture is that it was taken in 1984 when the 20,000-dwt ship made the first of several shipments of pipes from Japan to the Ob' estuary via the "impossible" Northeast passage. It was following exactly the same route, to exactly the same destination as the much-lauded Beluga Fraternity and Beluga Foresight. Furthermore, the ship made the journey without an icebreaker escort.

From the same source, we also learn that ships plying this route have been visiting Vancouver since 1979.

In 1986 three made homeward passages with grain after the end of the normal navigation season. The last cleared Vancouver on 12 November, and with minimum assistance reached Arkhangelsk on 2 December. Grain shipments from Vancouver to Arctic ports were continuing up to 1992, when the Ivan Bogin cleared Vancouver on 27 August 1992 for Murmansk.

As to European ships making the passage, the Germans have been there before, beating the Beluga fleet by nearly 70 years. This they did with the 3,287-ton converted merchantman Komet.

During the war US-built lend-lease vessels, including liberty ships handed over to the Soviets, made 120 voyages with cargoes from the American west coast via the Bering Strait to northern ports, following routes similar to that followed by the Beluga fleet. Navigation by Soviet vessels continued after the war but, in the early stages of the Cold War, the route was closed to Western vessels – not by ice but by politics.

The first offer to open the Northern Sea Route to international shipping was made early in 1967, when it was argued that it could save thirteen days between Hamburg and Yokohama as opposed to the conventional link via Suez. To demonstrate the viability of the route, Soviet cargo carriers made three demonstration voyages from north European ports and Japan. 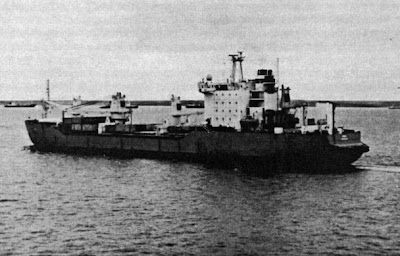 The following year space was offered to foreign shippers in eight SA-15s trading between Europe and Japan via the Arctic. In 1991 there were fifteen such voyages with 210,000 tons of cargo (one pictured above). That year, the Northern Sea Route was again declared open to foreign shipping.

To test the route, the French Arctic supply vessel "L'Astrolabe" left Le Havre on 27 July 1991 and successfully navigated the NRS, arriving in Japan in early September.

Yet another European vessel followed in her wake. In the summer of 1997, the Finnish-flag tanker Uikku (pictured, below right) sailed the length of the NSR. beginning in Murmansk 3 September, and discharged fuel along a number of Russian Arctic ports. It arrived in Pevek on the 12th to discharge fuel and then sailed through the Bering Strait on 15 September. 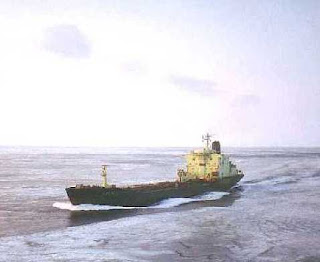 After picking up more fuel in the Pacific the ship sailed back along the NSR. discharging fuel at several ports and reaching Murmansk on 14 October. It was reported by the Russian NSR authorities that a Latvian-flag tanker also completed a full transit of the NSR in 1997.

And yet The Independent has the nerve to claim that, "No commercial vessel has ever successfully travelled the North-east Passage," while The Times in an updated version of its story, is still telling us that "the voyage was considered impossible until a few years ago."

As for Niels Stolberg, founder and president of the Beluga Group, when he tells us that, "We are all very proud and delighted to be the first Western shipping company to have successfully transited the legendary Northeast Passage," why is the media taking him seriously?