Rising from the dead 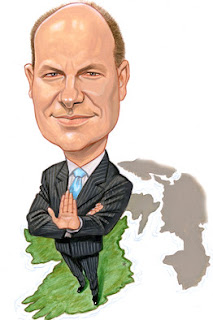 One would have thought that Declan Ganley, after his drubbing in the euro-elections, might stay in his little hole – especially as we heard that he was to quit politics.

The ego will always out, though, and the great man has now re-emerged to take command of the second Irish referendum, giving the Wall Street Journal the benefit of his pearls of wisdom.

For a man who chose a former MoD publicity officer as the leader of his election campaign, and who offered a platform where to describe it as "incoherent" would be an undeserved compliment, to have him on the "no" side is something of a mixed blessing.

The chances are, though, that he has picked the winning side, as sentiment hardens against the “colleagues” and the Irish people realise they are being taken for fools – and have the fortune to have the opportunity to deliver the shamrock version of a Bronx cheer to their masters.

If the Irish people prevail, it will most likely be in spite of rather than because of Ganley's efforts, this dim little man still prattling about being a "committed European." He is not a eurosceptic, not in any way, shape or form, he tells us, chirping that he believes, "that Europe's future as united is the only sensible way forward."

While saddled with Ganley, however, the "no" campaign is able to benefit from the increasingly crass hand being played by the Irish government, which is relying on a procession of visiting commissioners in an attempt to sweet-talk the Irish into believing that the EU can turn water into wine.

If the Irish do fall for this blarney, we will have to revisit all those Irish jokes but, on the face of it, the only jokes currently in town are the Irish government and Ganley.