They are not all bad 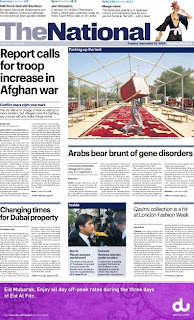 Regular readers may occasionally have sensed a slight degree of hostility on this blog directed at the journalistic fraternity. However, never let it be said that we are so blindly critical that we are unable to recognise good pieces of work when we see them.

One such – about the Afghan war - in the current edition of The Times is written by Anthony Loyd, of whom we have been quite complimentary over on DOTR. What struck me in particular was this extract:

Given the British government's catastrophic failure in leadership over the war and its inability to explain to the public what it is at stake in Afghanistan that justifies the current losses, it is no surprise then that the high level of attrition among troops undermines support for the war at home.

However, senior British commanders should not be excused from responsibility for the crisis. There has been little uniformity in the approach of different British brigades to their operations in Helmand. Some in the past, displaying little comprehension of current counter-insurgency doctrine, have described their short-term raid techniques against the Taleban as "mowing the lawn".

Yet "mowing the lawn" has enmeshed thousands of young Pashtun men into an alliance with a small Taleban hardcore. As a result, British soldiers are paying a heavy and often unnecessary price, fighting insurgents who are mostly "accidental guerrillas" of a particular valley or village, drawn into a fight against foreigners through natural inclination, as much as it would be our inclination if the situation were reversed.

Loyd joins that very small band of journalists writing about Afghanistan who are prepared to criticise the military performance, breaking free of the default mode in the British media, which has as its narrative, government baaaaaad army gooooood, couched in absolute black and white terms, with not even a suggestion that there could be grey areas.

What makes this worse is that while it is rare enough to see journalists criticise the military, even fewer are prepared to take on the media. One such is Martin Newland, former editor of The Daily Telegraph. But then, he can afford to. He is now editor-in-chief of a newspaper in Abu Dhabi called The National.

Anyhow, he writes a superb piece about how the media has turned the reporting on Afghanistan into a grotesque "reality TV circus that demeans the sacrifice of war". In the UK, this would no doubt elicit a storm of protest, not least from many of the blogs which seem to be part of and reinforce what Newland calls "moral infantilism".

That is not to say that there is not some very good writing on the web. There most certainly is. In this piece, for instance, Brig-Gen Mark T. Kimmitt (ret.) - the former US assistant secretary of state for political-military affairs – writes of a "war of exhaustion" and the requirements for success in Afghanistan. It is a perceptive piece of writing.

Thus, the quality is there if you look for it. The disappointment is that it is so rarely found in the British media but – rare though it is – even there the occasional good piece can be found. They are not all bad.