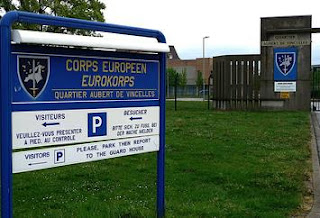 The Irish Times is carrying a report headed: "French minister urges EU defence budget." referring to the European affairs, Pierre Lellouche, who has proposed setting up an EU defence budget similar to the Common Agricultural Policy.

One can immediately see why the Irish press finds this interesting enough to publish. EU defence ambitions are an issue in the forthcoming referendum, where the charge is that the militarisation of the EU through the constitutional Lisbon treaty will affect Ireland's neutrality.

However, one might have thought that a French minister making such alarming proposals would excite a wider interest. The man is, after all, suggesting that defence spending should be dealt with like spending on other EU priorities such as agriculture, technology or the environment.

Lellouche holds that there is little point in creating the external action force envisaged in the constitutional Lisbon treaty if "Europe" as an entity was not prepared to pay for its own defence.

Paris, the Irish Times reminds us, has set the goal of building EU common defence as one of its strategic priorities for the union. And, although there is no legal base in existing treaties or in the constitutional Lisbon treaty for the EU budget to be used for defence or military spending, there is the mid-term review of the EU budget looming. This could be an opportunity to open discussions on the issue.

In fact, the chances of anything firm emerging are slight, as any proposal to use the EU budget for defence spending would require unanimous approval from all member states. Ireland and Austria would most certainly oppose any such move.

However, as with the European Defence Agency, there is nothing to stop an inner group setting up their own fund, on an "intergovernmental" basis, and asking the EU to administer it. By these means do we see the steady encroachment of the EU into areas formerly reserved for member states.

Our problem is that these statements by obscure continental politicians so often have a habit of coming to pass, so we ignore them at our peril. By the time we actually take notice, it is often too late. The antidote is to scream loudly and early, before such proposals have a chance to take root. But that presupposes the media is on the ball. And, Irish Times apart, it is clear that it is not.