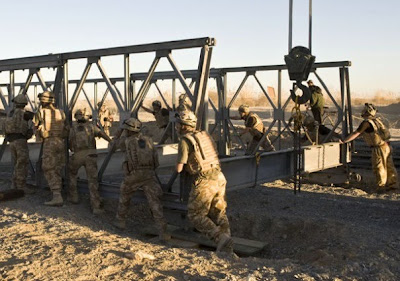 One of those icons of British engineering and inventiveness is the Bailey bridge. Nothing stands still, of course, and the design has been updated and improved, now called the Mabey logistic support bridge (pictured in Afghanistan) - but it remains recognisably the same basic design as its predecessor.

Sadly now, that icon is irredeemably tarnished as its current manufacturer, the Reading-based Mabey & Johnson, has just been convicted of bribery and, according to The Independent, fined £3.5 million plus costs. It has also been forced to give an undertaking to repay some of its bribes, the whole package of fines and costs setting the company back over £5 million.

The company has admitted to parting with so-called "white man's handshakes" totalling £1 million, thought to have helped it harvest contracts worth £60 million, mainly in Africa, Bangladesh and Jamaica. It also pleaded guilty to "making funds available" - more than £365,000 - to Iraq between May 1, 2001, and November 1, the following year, breaching the UN sanctions against Iraq, securing a £2.56 million contract.

There is one mitigating factor, in that the company reported its own transgressions to the Serious Fraud Office, triggering an investigation and the prosecution, but only after it had left a paper trail of incriminating documents, leaving no doubt of its criminality. One wonders whether the confessions were simply to pre-empt action which would have happened anyway.

That apart, the warm glow of pride one feels when seeing a Bailey bridge in use is no more. Like so many things, this feat of engineering will forever be associated with the stench of corruption.