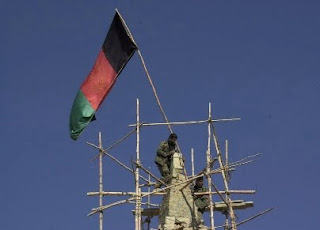 It is always unwise to take any official statement at face value – but the same might be said of any statement by the media. Healthy scepticism should be the default mode. So what does one believe when the media charges the government with misconduct, and the government flatly denies the charge?

That is the conundrum presented by a piece in The Sunday Times today. Written by a reputable journalist, Stephen Grey, under the headline: "No 10 asked army to delay Afghan attack until after Gordon Brown's visit", it makes a very serious charge.

Specifically, Grey alleges that during the recapture of the Musa Qala in December 2007, General Andrew Mackay – commanding the operation - "was furious to be asked by Downing Street if he could delay the operation and spare potential embarrassment to Brown." Mackay refused.

The scenario is plausible enough, and the background is set out in Grey's book, Operation Snakebite.

If the operation had been successful – as was anticipated – Brown could have been accused of "political opportunism", attempting to bask in reflected glory. If the operation failed, or there had been a high number of civilian casualties (the greater fear), this could have proved embarrassing for Brown when he met president Karzai.

As to the accusation that No 10 sought to interfere, this is indeed flatly denied. A Downing Street spokesman states: "The suggestion that Downing Street asked for a delay, or indeed any change, to military plans in Afghanistan before the Prime Minister visited at the end of 2007 is utterly untrue."

So, who do we believe? Well, in his book, Grey publishes details of a meeting of "generals and civil servants" at the Ministry of Defence in Whitehall on 4 December 2007, when the attempt to interfere with the operation was supposedly made. With it due to start in three days time, he refers to an "official" (no more detail is given) asking: "Does it have to be so soon? Can't it all be delayed?"

There then appears to be a general discussion about the political implications of the coincidence of the operation with the prime minister's visit. Addressing the meeting via an intercom was General Nick Houghton, based at Joint Operations HQ in west London. He, according to Grey, was asked to "check back" with theatre and "see if there could be any slippage." But, Grey adds, "few expected anything to change".

From this narrative, several points emerge. Firstly, the "official" initially asking whether there could be a delay was not identified. Secondly, there was no mention of No 10 – in this or any other context. Third, there seems to have been a general discussion on the proposition, from which it can be inferred that a consensus was reached. Fourth, this "consensus" was translated into a request that Houghton "check back", couched in terms of "see if". This implies that this was an exploratory question – a query - and by no means a demand.

Finally, and crucially, Houghton was not at the meeting. He was communicating via the intercom from another location. He then – or perhaps even someone delegated by him - communicated with "theatre", although Grey does not specifically assert that anyone talked to or communicated directly with MacKay.

MacKay, of course, was in Afghanistan (as indeed was Grey at the time). If he was contacted directly or indirectly by Houghton or someone deputed to do so, how did MacKay know that the query came from No 10? This is not specified, all in the context of Grey himself making no mention of No 10.

Herein lies perhaps the crux. Most people are familiar with the joke of First World War vintage, recalling a message saying: "send reinforcements, we're going to advance." Garbled in transmission, it comes out as: "send three and fourpence (old money), we're going to a dance". A similar dynamic might be at play.

Deconstructing the key parts of the narrative, we have in London an unidentified official, a general discussion and a somewhat ambiguous "request" which could be construed as asking for information on options. What precisely was conveyed to MacKay in Afghanistan, by whom and in what circumstances, is not specified.

At the receiving end, however, it is quite possible – perhaps aided by ambiguous wording or even some embellishments – that MacKay believed he was being asked to delay the operation and the source of the request was No 10. But a belief does not make it so. MacKay could have been misled, or simply misunderstood what was being asked of him.

As to the meeting in Whitehall, it is quite possible that the issues discussed reflected concerns that political fall-out would reflect badly on the officials, and they would be blamed for not taking measures to mitigate potential problems.

Rather than being directed by No 10, therefore – and Grey makes no accusation as to Gordon Brown being aware of what went on - the officials could simply have been covering their own backs. What we know of the narrative is entirely compatible with officials seeking to establish that options had been considered, and for good reasons had been discarded.

In the event, Grey in his book does not record MacKay's (or anyone else's) response to any query. That the operation went ahead as planned is testament to the fact that the response to the Whitehall query was "no". In fact, Houghton need not have referred it to MacKay - he had the authority to say "no" then and there.

If he did refer what amounted to a "request for information" back to theatre, it would have been as a matter of "form", in full expectation that the answer would be "no". If MacKay, against all expectations, had said "yes", most likely Houghton would have told him to stop being a bloody fool and get on with it.

On that basis, although Grey asserts that MacKay was "furious to be asked by Downing Street if he could delay the operation", we have no context. And whatever message MacKay did receive, Grey relies on his recall, some time after the operation had finished.

Interestingly, nothing Grey asserts in relation to MacKay's actions and reaction is in quotes. The narrative is unsupported by direct (or any) evidence. Rather, it is based on hearsay and ex post facto recollections, relying heavily on a particular interpretation of what could be an ambiguous request, delivered via a fragmented communication system.

On the other hand, the newspaper seems to offer very slender grounds on which such a serious accusation is made. For one of such gravity, more would be expected. Without more evidence, healthy scepticism should apply.

What is so alarming though - to judge from the comments on the Sunday Times piece - is the willingness of readers, uncritically, to believe the paper's account and to pass judgement. How many people tell you that they never believe anything they read in the papers? The evidence would indicate otherwise. We, the people, are our own worst enemies.