Silence not an option 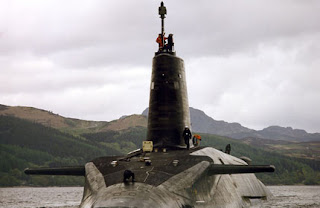 The Times is putting out a story this morning that the Conservative leadership is "backtracking on spending commitments for Britain's Armed Forces and could yet shelve plans to replace Trident."

The trouble with these sort of stories – this one by Tom Baldwin – is that you really do not know whether this is for real, or whether this is the Tory party testing the water in order to gauge public reaction.

What is becoming very clear is that the Tories are all over the place when it comes to defence. Only last year – and for some time before that – Liam Fox was pledging that the three main "big ticket" defence projects would be carried over. These were the Trident programme, the navy's carriers and the army's FRES programme. And then there was talk of increasing the size of the army.

Although commonly cited as costing £5 billion, the carrier programme is more like £20 billion if you include the aircraft and infrastructure costs. This with FRES at £16 billion and Trident puts the commitment close to £60 billion, tying up the procurement budget for many years to come.

Now, it seems, the Tory hierarchy are not quite so sure, and – we are told – are relying of their commitment to a strategic defence review (SDR) to hold off having to make any firm commitments. But then, if the Party is really testing the water, and the public reaction to any cutbacks is hostile, they have a problem.

The "big ticket" programmes, for all their eye-watering costs, are only part of the equation. The accumulation of small and medium projects – not least the MARS replenishment fleet replacement for the navy, the A400M air transports for the RAF and the Future Lynx programme for the army all add up to a tidy penny.

Then there remains more than a little strategic confusion. Fox, in a recent speech was anxious to talk up the Russian threat, with reminders of that country's "re-armament" programme.

This threat, we have considered to be somewhat overstated, especially when Putin had to call on elite troops from the Moscow region to overpower Georgia last year. And a recent report on the state of Russian defence industries lends credence to the view that the Bear is no longer a significant conventional military threat.

That Fox seems to feel the need to talk it up suggests that he is listening very closely to the UK defence industry, which would much prefer spending on conventional capabilities to deal with inter-state wars, rather than see the focus on counter-insurgency, from which there are lean pickings for domestic producers. But then, with Charles Guthrie advising the Tory team, this is only to be expected.

The Tories could, of course, put the speculation to bed by declaring their hand now – making it clear that the UK can no longer afford to finance a military capable of autonomous action in a high-intensity inter-state war. This, though, would need a further declaration of where Britain sees itself in future conflicts, how it would manage its alliances and what precise capabilities it deems essential.

These grown-up questions, however, demand a level of clarity and – to an extent – political courage, which has not yet been apparent from the Tory opposition. And while deferring decisions until after the election may seem an easy way out, events seem to be forcing the pace.

And then, of course, there is the Irish referendum on the horizon. If the Irish fail to deliver a "no" vote and the "colleagues" gets their treaty ratified, the EU military ambitions will climb higher up the political agenda – with profound spending implications.

Having made a meal of attacking Labour on its defence credentials, the electorate may be in the mood to demand something a little more substantive from the Tories than the fare on offer, especially if there is an undeclared agenda to cut spending or, even worse, an intention to buy in to the EU's martial ambitions.

Silence on these issues would appear no longer to be a credible option.