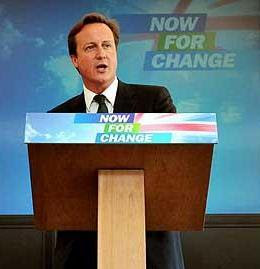 Mr Cameron, we are told, has repeatedly refused to say what he will do if he comes to power with the constitutional Lisbon treaty ratified, saying only that he will "not let matters rest."

Now, in an LBC radio interview, the Tory leader said that if the treaty is ratified, "new circumstances" will apply, suggesting a new Tory policy will be needed.

"If this treaty is still alive," he says, "if it is still being discussed and debated anywhere in Europe, then we will give you that referendum, we will name the date during the election campaign, we'll hold that referendum straight away and I will lead the campaign for a No."

He thus declares: "I want us to be in the European Union. We are a trading nation, we should be co-operating with our allies and friends in Europe over things like the environment and crime, of course we should."

It is interesting here to see a man on top of his brief. Germany, as my co-editor observes ratified on 25 September.

That aside, this makes things very difficult for us. The inference, headlined by The Daily Telegraph is: "David Cameron hints Tories would not hold referendum on ratified Lisbon Treaty". The Times has come to the same conclusion. In fact, it is very clear to anyone with two brain cells to rub together that Mr Cameron is not going to hold a referendum if the treaty has been ratified by the time he takes over the administration.

What precisely Mr Cameron intends to do, he himself probably does not know. He will most likely make a decision when he has to – when he is absolutely forced to make one – and not before. And what precisely he decides will be guided by calculations as to what he can get away with, and what is least damaging to his standing and the electability of his party.

Mr Cameron cannot be blamed for this. He is a politician with aspirations to become prime minister, and he is not going to let discord over the EU interfere with his ambition. Therefore, his will be a political calculus, untainted by principle or higher motivation. He will do what he has to do to get his party elected.

Those lukewarm sceptics – who put party before principle – rest on the hopes that, once elected, the "real" Cameron will emerge, to become the terror of the EU, ripping into the "colleagues" and dragging powers back from Brussels.

Any such hopes lie in the realms of fantasy. Mr Cameron, in telling us that "we should be co-operating with our allies and friends in Europe" is speaking the language of the Europhile. And that is what he is.

Co-operation is not, and never has been on the table. Membership of the EU requires the subordination of our parliament to the diktats of the unelected commission and the tyranny of qualified majority voting. Our "co-operation" in that is the same as the co-operation of the handcuffed prisoner told to enter a cell by his jailers.

In terms, Mr Cameron is probably calculating that the popular desire to relieve Gordon Brown of his command will overwhelm any doubts or concerns over his intentions towards the EU. He will know that the electorate is not going to promote the EU to the top of the political agenda. He will not lose the election because he does not promise a referendum.

Therefore, his strategy will be to offer something vaguely credible - the so-called slither-out clause - enough to give hope to the lukewarm eurosceptics that something might be on offer when he gets elected, abandoning the irreconcilables whose votes, he has calculated, he does not need in order to win.

What would make the difference is a decisive caucus of voters who support Cameron but who are not prepared to back him unless he takes a firm line on the EU. There are probably enough out there to damage him, but not enough to cost him the election. And winning is all that matters. They can be and have to be ignored.

We are thus in a situation where the leader of the opposition party has, quite deliberately, set about to reject our aspirations in order to pursue his own. The only offer on the table is that we should abandon ours in order that he can achieve his, with no promise that any concessions will be made at a later date. That is not an attractive offer.

The consequence of rejecting it, however, is that Labour might just retain power. Mr Cameron is perhaps confident that there are enough people not prepared to take that risk and will thus vote for him in spite of and not because of his policy on the EU.

That calculation is for Mr Cameron to make. Equally, a sophisticated electorate will make its own calculations. Only a fool would take them for granted.