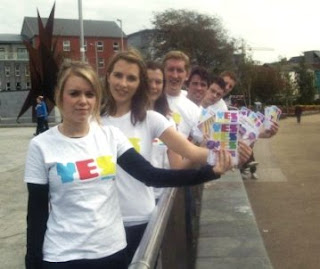 Asked about the "spontaneous" demonstration against the arrival of Nigel Farage, in Ireland to campaign on the Irish referendum, Sharon Waters, a spokesperson for Generation Yes, said that the protest was simply a gathering of private individuals who arrived to make their feelings known.

Ms Waters said there was no place in an Irish referendum campaign for politicians from outside Ireland. And she certainly does not like UKIP, if this statement is any guide. The United Kingdom Independence Party (UKIP), a byword across Europe for right-wing extremism, xenophobia and bigotry, it says, continuing thus:

Generation YES are outraged at this intervention by foreign interests into this crucial debate on Ireland’s vital national interests. We can be sure that UKIP are promoting their own repugnant agenda, with no concern for the welfare of the ordinary people of Ireland. They want to use the Irish referendum for their own ends – to get England out of the EU. They seek to dismantle the Belfast Agreement, reintroduce the death penalty and abolish social security, they prevent disabled people from standing for election on their ticket, and they also deny climate change and the Holocaust. We need to reject these offensive people, and to continue our own progressive, positive relationship with Europe that has served us so well.

This is, incidentally, the same Sharon Waters who is a campaigner on human rights and environmental issues, most notably for Amnesty International and the Australian Red Cross.

She might also have a word with her colleague, Clodagh Power, on the Generation Yes team. This little lady has just spent a year at De Paul University Chicago. While she was there, she worked as an intern at the International Human Rights Law Institute and was a volunteer at the Obama presidential campaign at his Chicago Campaign Headquarters.

One can see a glittering future set out for these little lovelies in European politics … just the right brand of total hypocrisy that should go down well in Brussels.