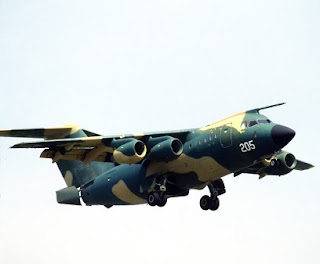 Opposition by innuendo continues apace, with shadow chancellor George Osborne today picking up the baton briefly wielded by Liam Fox, to hint that he might cut three of Britain’s biggest defence projects, with a combined value of nearly £30 billion.

The axe, Osborne is suggesting, could fall within weeks of a Conservative administration being elected, and in his sights is £20 billion for the Eurofighter, £4 billion for the two Royal Navy aircraft carriers and £2.7 billion for the A-400M transport aircraft.

This, though, is highly tentative, as the shadow chancellor admits that he does not know what the "break clauses" in the contracts would involve, if the projects were scrapped.

In fact, the RAF as already acquired 55 Eurofighters, costing £3.8 billion and the rest of the order is widely thought to be tied in to stringent cancellation penalties which would negate any possible savings. Similarly, the MoD has already spent about £1 billion on early work on the two aircraft carriers, and there would doubtless be penalty clauses in place if work was abandoned.

Not mentioned though is the F-35 order, slated at approaching £10 billion. Presumably some would have to be cancelled if the aircraft carriers were ditched, although the RAF might want more aircraft to pick up on the capacity which would otherwise be delivered by the Navy.

As to the A-400Ms, the precise status of the commercial dealings between the government and Airbus is a closely-guarded secret, but even if the UK walked away from the project, it is not clear whether the £500 million already invested would be returned. Even if it was, cancellation would release very little money. The RAF desperately needs lift capacity and either or both C-130Js or C-17s would have to be bought to make up the shortfall.

Offering some possible flexibility, however, is BAE Systems which is offering a militarised version of its BAE 146 regional jetliner (pictured), with converted airframes available for the knock-down price of £3 million apiece.

BAE Systems at present owns some 47 of these aircraft, leased to regional airlines, but many of them are soon to be released as the airlines acquire new equipment. Conversion costs to military specification, including a cargo-carrying capability, are relatively modest.

Furthermore, the BAE 146 was designed for short-haul operations out of regional airports with tight noise restrictions, so it is capable of making steep climb-outs and descents, and can operate from short, unprepared airstrips with minimal modifications. This makes it optimal for military uses, albeit it can only carry half the load of a Hercules and it lacks a rear loading ramp.

However, acquisition of a number of these aircraft could be sufficient to ease the pressure on the current RAF fleet, especially if they were pooled with other coalition aircraft in Afghanistan, allowing C-130s from other nations to be used when needed, in return for BAE 146 capacity.

Innovative options such as these would seem to offer more scope for dealing with the current defence crisis. If not saving money in the longer-term, they enable cash flow to be managed, deferring major expenditure and flattening the peaks. Slowing down the Eurofighter production and stretching the F-35 programme – which has not in any event been finalised – while proceeding slowly on the carrier build – would have like effect.

Mr Osborne, therefore, has not necessarily sketched a path to salvation and, in fact, may be all at sea when it comes to cutting government spending. The need for a scalpel rather than an axe is indicated, but whether he has the skill to wield this precision tool has yet to be demonstrated.