They know nothing ... they learn nothing 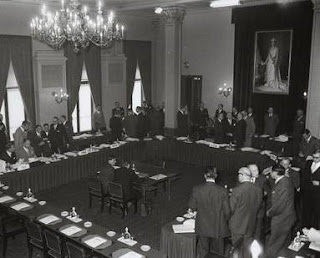 The increasingly dire Daily Telegraph today purports to offer us an in-depth assessment of the EU's "health and worth".

But the piece de resistance is the "timeline" giving the "history" of the EU. Following exactly the EU's own hagiography, it perpetuates the myth that the origins of the EU lie in the post-Second World War period – as opposed to the reality that the intellectual genesis stems from the wreckage of the First World War.

The distinction is vitally important as it explains how a very small group of people, including Jean Monnet and Arthur Salter, constructed a paradigm to deal with the geopolitical structures of the 1920s, aimed at doing precisely what the politicians then failed to do – to prevent the Second World War.

That they failed did not deter them. After Nazi Germany had been defeated, they dusted off the same plans and applied them to a completely different geopolitical situation, as a means of preventing further war in between Germany and France – something which then (and now) was never going to happen.

It is that flawed (and failed) paradigm which now dominates European politics, and underlines the fatuity of the very essence of the European Union.

This, we explain in detail in The Great Deception, which we summarised on the blog, pointing out that the EU was already an idea whose time has gone.

But the likes of Adrian Michaels do not need to read books such as ours – they already know it all. And if they need to fill in any details, they can always call up Garton Ash to put them straight. These are the people who seek to keep us informed. The know nothing, they learn nothing. They are the enemy.

Pic: the first meeting of the European Coal and Steel Community Assembly – the fore-runner to the EU parliament. It was at this meeting that Monnet announced that they were setting up a "government of Europe". Nothing has changed since.