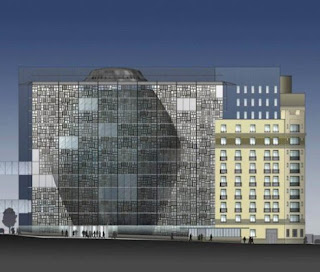 We learn from Bruno Waterfield that the EU is spending £280 million on building a new palace for its president and staff – ready for when the constitutional Lisbon treaty is ratified.

Named the Résidence Palace (pictured) after an existing Art Deco building which it replaces, that building in 1940 was used as the headquarters of the German army during the Nazi occupation of Belgium. This is a complete coincidence, and totally irrelevant. But it is kind of appropriate.

Meanwhile, as the "colleagues" lavish money on their grandiose palaces (at our expense), having recently spent £185 million refurbishing the Berlayermonster, poor old Betty is scraping around for the £44 million needed to pay for the huge backlog of repairs to our royal palaces.

Strangely enough, our contribution to the two latest EU follies is about £60 million – give or take – which would be more than enough to restore Betty's palaces to their former pristine glory, with some change left over. Instead, she is having to sell off chunks of the estate, starting with the old stables in the Royal Mews, in the grounds of Hampton Court.

These are expected to fetch £2m, which is chump-change compared with the total amount needed. At least it is a start. But it is a more than adequate reflection of our times that our national heritage is falling into disrepair, with bits having to be flogged off to keep the rest going while our money is pouring into the coffers of the "colleagues", to finance their vainglorious schemes.

On this, of course, there should be national outrage, and a very difficult decision to make ... who to shoot first, our own government or the "colleagues" in Brussels (even if both would be preferable, but you have to prioritise).

But nothing will be said. We will go on paying and, eventually, new broom Dave will take over. And, guess what! We'll go on paying. We really are going to have to shoot them, you know.