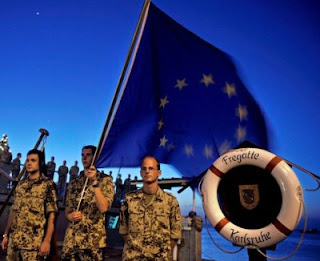 Bruno did it yesterday. Klein Verzet takes issue with it. They've been trying it on for years and, in the fullness of time, will succeed – as they always do.

The great strengths of the EU are its persistence and its extremely narrow focus. It is useless at doing anything, except expanding its own powers and establishment, which it achieves with consummate skill.

But it only wins because we let it: because our political classes are too feeble, too introspective and self-centred to do anything about it, because the Great British Public can't be bothered, and because the media is in the entertainment industry.

Meanwhile, UKIP loses a treasurer and, according to some accounts, will shortly lose an MEP – a widely predicted outcome. All in the world is normal therefore – UKIP in turmoil and the EU goes marching on, waving its flag in all corners of the world at someone else's expense.