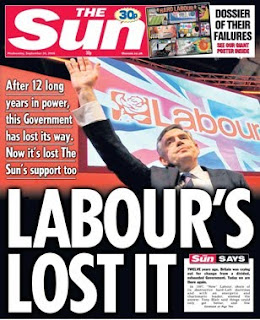 The real story of the Labour years is one of under-achievement, rank failure and a vast expansion of wasteful government interference in everyone's lives. So says The Sun which, at the tail end of the Labour party conference, has ostentatiously switched sides and is now supporting the Conservatives.

Labour, in the persona of Lord Mandelson, has been quick to respond. He says: "The proprietor might have changed his mind but I don't think the readers want The Sun to set on New Labour. The last thing Sun readers want is to see their newspaper turned into a Tory fanzine. They want a newspaper, not a propaganda sheet."

One cannot resist the temptation of remarking that, if the readers wanted a newspaper, they wouldn't be buying The Sun. But then, given what is generally on offer, they would have trouble buying anything which conformed with that description.

One wonders, though, quite how much traction a tabloid rag of the nature of The Sun really has. Rather than leading opinion, as it would have us believe, the paper is more likely simply following the herd sentiment. Sensing change in the wind – which is not exactly a stunning feat – it has nailed its colours to what it perceives to be the winner's mast. This is indeed followership rather than leadership.

No one, however, will be at all deceived into thinking that The Sun's change of heart is anything to do with a new-found yearning for good government, truth, justice, apple pie and free beer on Sundays. Mandelson puts his finger on the proximate cause for the change – Mr Rupert Murdoch, the proprietor of The Sun and owner of the loss-making News International group.

With his larger business empire reputed to have lost £2 billion last year and with reports of his flagship newspaper, The Times, losing £2 million a week, Murdoch is locked in battle with the BBC over plans to charge for online web content, plans which are jeopardised by the BBC's torrent of "free" content on its taxpayer-funded websites.

No doubt, by allying himself to what appears to be the winning side, Murdoch hopes that vague Conservative ideas on curtailing the ambitions of the BBC might firm up, to his own financial advantage – with the aid of one or two Faustian deals done in the remote corners of smoke-free rooms.

Therefore, what The Sun thinks or says about which party should form our new administration should be irrelevant. What is not irrelevant is that a rich and powerful man can use his products in an attempt to shape public opinion, to his own financial advantage.

However, while his intervention might have an effect, what is going to happen would have probably happened anyway. Most people will make up their own minds. For those people, The Sun's endorsement offers a certain entertainment value, but very little else. For the rest, those who allow their opinions to be shaped by The Sun deserve exactly what they get. The pity of it is that the rest of us do not.